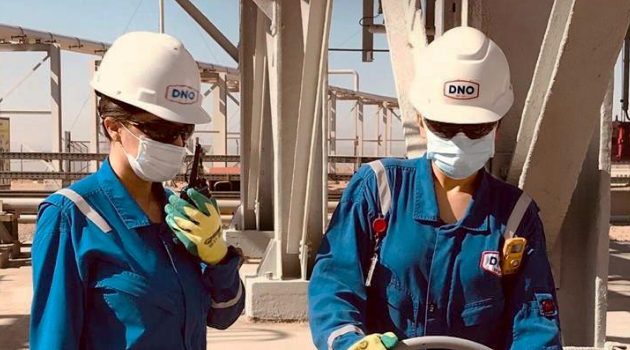 In the North Sea, net production averaged 14,000 barrels of oil equivalent per day (boepd) in the quarter (11,600 boepd in the second quarter). In August, DNO announced the Ofelia discovery in the highly prospective Troll-Gjøa area offshore Norway, an area in which the Company holds 12 licenses and has scheduled a six-well exploration program over the next 12 months. Also in Norway, the Company continues to review its field development projects ahead of yearend 2022 investment decisions in light of recent proposed fiscal changes.

The Company's operational spend in the third quarter stood at USD 192 million, bringing the total to USD 548 million over the first nine months. Full-year 2022 operational spend is now expected to be USD 725 million, down from USD 800 million, largely due to the reduction in US dollar denominated spending in the North Sea.

With a free cash flow of USD 151 million in the quarter, DNO continued to pare back gross debt. The outstanding amount of the DNO03 bond was reduced from USD 176 million to USD 131 million, while drawdowns under the reserve-based lending facility dropped from USD 95 million to USD 35 million. At the end of the quarter, gross cash deposits stood at USD 818 million and net cash totaled USD 252 million.

Last month, the Company closed the transaction with its largest shareholder RAK Petroleum plc, in which DNO had an ownership interest, pursuant to an all-share transfer, to acquire gas and liquids production, development and exploration assets offshore Côte d'Ivoire. Following the inter-company transfer, DNO holds a 9.09 percent stake in Block CI-27 and an eight percent stake in exploration Block CI-12, both through Mondoil Enterprises, LLC, which, in turn, holds its stake through and participates in the management of Foxtrot International LDC, the operator of the two Côte d'Ivoire licenses.

At its 2 November 2022 meeting, the Board of Directors approved a dividend payment of NOK 0.25 per share to be made in November 2022. With the completion of the DNO-RAK Petroleum transaction, the Board also announced that of one of its long-serving members, Shelley M. Watson, was stepping down to pursue other interests in her home country, Australia. "Shelley, whose last position was RAK Petroleum's Chief Operating Officer and Chief Financial Officer, served as a DNO director for 12 years and is respected and liked by all who worked with her," said Bijan Mossavar-Rahmani, DNO's Executive Chairman. "She will be missed," he added.

An earnings call with DNO executive management will be held today at 10:00 am (CET). A link to the call is available on the Company's homepage www.dno.no.