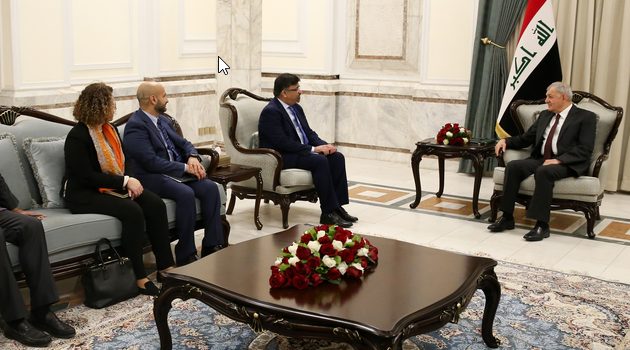 By Editor on 14th December 2022 in Iraq Banking & Finance News

On Tuesday, December 13, 2022, the President of the Republic of Iraq, Abdullatif Jamal Rashid met with a Delegation from International Finance Corporation (IFC) for the Middle East, Pakistan, and Afghanistan, headed by its Regional Director, Aftab Ahmed. The meeting took place at the Baghdad Palace.

Means of promoting investments and service projects in Iraq were discussed during the meeting, with a focus on the need to support the private sector to play its crucial part in helping the public sector to foster economic growth in the country.

Discussing the country's economy, His Excellency President Rashid indicated, that the various cities of Iraq had previously suffered because of negligence, terrorism, and economic deterioration, but nowadays, Iraq has become more peaceful, and politically and economically stable, and its natural and human resources give it the ability to build an advanced, prosperous country.

It is a matter of critical importance to optimize the utilization of the country's wealth, the President stated, hence service projects that meet Iraqi citizens' aspirations and boost the economy, should be created.

President Rashid reiterated that the State institutions should minimise the routines to allow smooth transactions, while relevant regulations and laws should be considered in determining the time and ensuring the successful completion of the transactions. Iraq's financial and banking system needs to be developed in a way that is faster, more accurate, and secure, HE added.

Referring to the mechanism of fostering economic growth in the country, His Excellency emphasised the importance of diversifying sources of national income, and Iraq had more than six thousand factories that have either halted operations or closed since 2003; these factories must be rehabilitated and rebuilt to help alleviate the economy, support the state's budget, and create jobs. The agricultural sector in Iraq suffers from neglect, hence plans must be set in motion to support the sector through the adoption of modern methods of agriculture and irrigation, HE, added.

The Regional Director of the IFC, Aftab Ahmed, stated that the IFC stands ready to fully cooperate with Iraq to foster its economic growth, and it is one of the countries that has priority for it has potential and resources needed for the completion of investment projects and contributing to the country's progress.