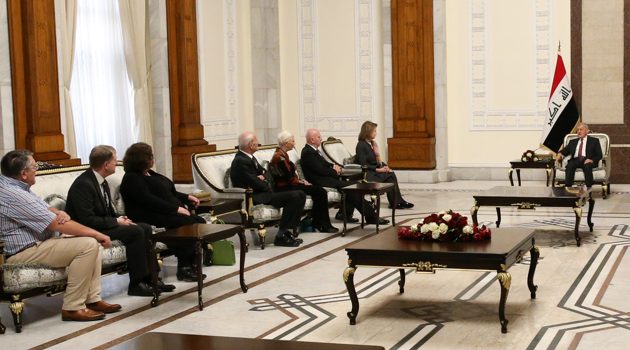 On Monday, January 23, 2023, the President of the Republic of Iraq, Abdullatif Jamal Rashid met with the Head of the Iraq Britain Business Council (IBBC), Baroness Emma Nicholson alongside her delegation from British universities, at the Baghdad Palace.

While speaking about Basra, Mosul, and Baghdad universities, His Excellency President Rashid said that Iraq's universities have historically had a good academic reputation. HE invited the delegation to visit Iraqi universities to examine their academic activities, and research programmes and find possible ways of cooperating with their respective universities.

One of the challenges we are currently facing is the increasing number of university graduates that are unable to find employment opportunities. The government has set plans in motion to address the unemployment crisis, including encouraging the private sector to create jobs for new university graduates, President Rashid said.

He also spoke about the importance of the English language among other skills, but more importantly, we need practical training more than theoretical aspects, including accountancy, business administration, and electrical and mechanical engineering.

Regretfully, the safety standards are not always met in Iraq, and this often leads to losses of lives, the President said, while noting the need to take advantage of safety standards in Britain.

Baroness Emma Nicholson thanked His Excellency President Rashid for the meeting and explained the works of the Iraqi-Britain Business Council in addition to the plans set in motion to support higher education in Iraq. The IBBC aims to raise the academic standards in Iraq by taking advantage of British experiences and helping bridge the gap between education and work.

Members of the IBBC delegation explained their plans to offer high-quality English language courses, vocational training, and information and communication technology courses approved by the British government to help Iraqi students develop the necessary skills. The academic programmes and experiences of the top British universities will be a welcomed addition to Iraqi universities.