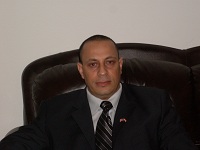 The end of U.S. combat operations in Iraq presents a unique opportunity for a new beginning in U.S.- Iraq’s relationship. However, given Iraq’s crippling challenges and U.S. sluggish economy, the success of a such strategic partnership is contingent upon the political will of both U.S. and Iraqi governments, the support of the international community, and the genuine commitment of the international oil companies - Iraq’s biggest investors.

Drawing on past experiences, the stakeholders (U.S. government, Iraqi government, UNDP, World Bank, international oil companies, etc…) need to devise a concerted post-conflict reconstruction strategy, Marshall plan type, that is capable of  a) averting the collapse of State's institutions and b) creating the conditions for a sustainable socio-economic recovery. However, before undertaking a such colossal challenge, stakeholders need to build a strategic framework defining  the mission's objectives (attainable and realistic), organizational design (steering committee, for instance) , stakeholders' roles and responsibilities, needed resources, and performance metrics.

Respectively, I'll explore key stakeholders' roles and responsibilities in Iraq's post-conflict reconstruction  as it's mandated by their respective missions.

In this process, Iraqi government should be treated as an equal partner that is fully responsible and accountable of its actions before its constituents and the international community. Consequently, the new elected government needs to formulate a comprehensive development strategy in concert with key stakeholders, including the planning for the impending multi-billion dollar mega-reconstruction projects, and the followings are some key areas of common interest and cooperation:

To ensure the success of its new mission "New Dawn" in Iraq, the U.S. needs to learn from its past mistakes - $53 billion of unfinished or poorly executed projects-- and capitalize on its acquired knowledge and understanding of Iraq's ethno-sectarian fabric, political landscape, and socio-economic dynamics. Thus, U.S. Department of State's Iraq strategic partnership office ISPO and USAID  should play a crucial role in coordinating and overseeing the reconstruction efforts in concert with other stakeholders e.g., Iraqi government, UNDP, etc....

Given UNDP extensive experience --Honest broker-- in conflict and post-conflict zones, the UNDP is well-positioned to promote and oversee national reconciliation, rule of law, and rehabilitate State's decadent institutions to enhance efficiency and  inclusiveness - Hiring and promotions are merit-based and not politically dictated.

Given the decay of Iraq's financial institutions  as result of decades of wars and sanctions, the World Bank's role,  key partner in this reconstruction efforts, is to provide post-conflict reconstruction expertise, financial and technical assistance,  which are key ingredients for a sustainable development.

Given the current Peak Oil and IOCs vested interest in a stable and secure Iraq, IOCs should play a major role in this reconstruction efforts. Oil sector is the engine of Iraq’s economy  -%90 of government revenue. Nonetheless, the oil sector challenges are hampering the country's economic recovery:

In sum, in the absence of a clear post-conflict reconstruction strategy, Iraq's convoluted political impasse and the international community inaction -- lack of political will-- are recipes for a prolonged political instability and ethno-sectarian strife; subsequently, jeopardizing all the hard-earned successes (e.g., fair elections, strong Army, etc...) and exacerbating  geopolitical tensions. Moreover, given the endured sacrifices, thus far,  in blood and treasure -- thousands of lives and over $ 751 billion war price tag -- it's imperative to stand by Iraq in these difficult times to prevent it from reverting to a military dictatorship or ,worst, religious tyranny.  In his speech to congress (12th March, 1947), President Truman exquisitely puts it when he warns us against lose of hope, destitution, and their grim outcomes chiefly chaos and tyranny:

"... The seeds of totalitarian regimes are nurtured by misery and want. They spread and grow in the evil soil of poverty and strife. They reach their full potential when the hope of a people for  a better life has died. We must keep that hope alive. If we falter in our leadership, we may endanger the peace of the world - and we shall surely endanger the welfare of our own nation..."

One Response to Iraq's reconstruction: Strategy and players