By admin on 18th November 2010 in Weekly Security Update

Overview
Security measures are currently heightened in Iraq for 'Eid ul-Adha, and this will likely remain the case until the weekend. Checkpoint searches will be tighter while many official offices will be closed. Public discussions on the government-formation process will also be interrupted until 21 November. Despite the increased security measures, however, militants will still be able to conduct attacks, even in what should be well patrolled central parts of Baghdad. Last week saw several notable attacks on the Christian community. Shi'ah religious sites were also targeted, with two notable mass casualty attacks in the holy cities of Najaf and Karbala. Overall, however, there was a fall in the number of violent incidents reported countrywide. The associated number of fatalities also fell, with at least 56 people reportedly killed and 221 injured. Of course this figure is unacceptably high, but it nonetheless constitutes a reduction from the previous week. 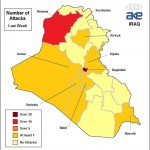 North
Kurdistan was quiet last week, with no major incidents reported. In contrast, the neighbouring provinces of Ninawa and Ta'mim saw several attacks, particularly in their respective provincial capitals of Mosul and Kirkuk. Indeed, Mosul remains one of the most hazardous parts of the country. Kirkuk sees far fewer incidents, but there was one kidnapping reported in the city centre, with some local news sources stating that two civilians were abducted from a restaurant in close proximity to a police unit. Kidnap for ransom is not nearly as widespread today than in the years prior to 2008 but it is an ongoing occurrence nonetheless.

Centre
Violence in the central provinces was concentrated in Baghdad. The city actually accounted for over 60 per cent of all incidents taking place around the country. The western district of Mansour saw a major concentration of violence. An affluent district prior to the invasion and hotbed of al-Qaeda activity after, the area saw a marked improvement in conditions over the past two years, with an increasing number of businesses - including restaurant facilities - opening to the public over recent months. The latest attacks, which took place at a time when security measures were supposed to be heightened, will likely cause many to question the abilities of the Iraqi security forces in the city centre. Having been targeted in several of the attacks last week the Christian community is also questioning whether or not to stay in the country and risk death, or leave and witness even more erosion of its cultural base in the country. Another key concern in Baghdad so far in November, particularly for investors and foreigners, has been the increased number of mortars fired against the city centre. The International/Green Zone has been the target of most of the attacks, although many of the rockets have gone astray, landing in nearby areas such as Qaddisiyah, Salhiyah and Karradah. While the chance of being harmed in such an attack remains statistically very low, a number of people have nonetheless been injured over the past two weeks.

South
As preparations are made for a major conference in Basrah, travelers are advised of two things. Firstly, the security environment in the province is far more positive than more central parts of the country. Secondly, however, is the fact that occasional security incidents do still occur. A car bomb in Basrah city on 8 November killed 10 people and injured over 40. A private security company employee was also reportedly killed and two more injured in a roadside blast in the West Qurnah area on 10 November. The outlook is certainly improving for the region, but companies still need to devote time and attention to their security provisions when operating in the area. Otherwise in the south, two car bomb attacks also targeted the predominantly Shi’ah holy cities of Najaf and Karbala last week, killing several people, including a number of Iranian nationals on pilgrimage. More attacks aimed at stirring up sectarian tensions should be anticipated during the Islamic month of Muharram, due to start around 7 December.