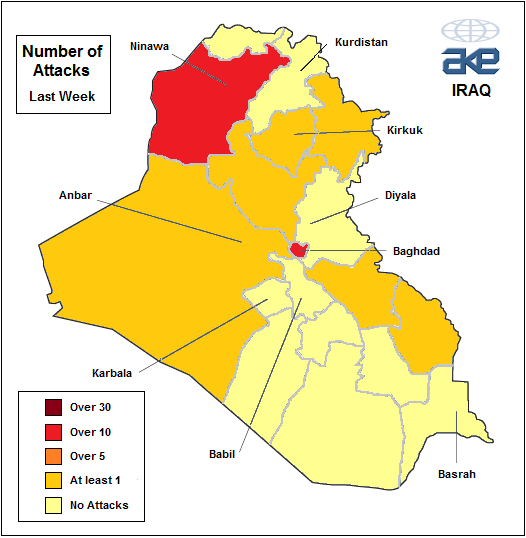 By JohnDrake on 16th March 2011 in Weekly Security Update

Levels of violence are still higher in Iraq than in January and February, but conditions did not significantly worsen over the past week. There was a decline in the number of violent protests taking place countrywide although there was also a rise in bomb attacks, particularly in Baghdad. The northern city of Mosul saw a rise in violence and while the nearby city of Kirkuk was relatively quiet there remain underlying tensions in the area which continue to mount. With the exception of the capital, the centre of the country saw a decline in violent activity. The south was also quiet. Personnel should note that there was an increase in the use of sticky bombs over the past week. These are usually magnetic devices affixed to a vehicle and detonated remotely. They are usually quite specific and are used to target specific individuals. Police personnel and mid-level civic employees are most at risk of being attacked with this type of tactic. The oil sector also came under attack last week, although incidents have decreased over the past five days.

Mosul remains the most hostile part of the north and last week it bore the brunt of attacks, with several people killed in shootings and bombings in the area. An Iraq-Turkey oil pipeline was also bombed to the south of the city, which led to it being shut down for five days. For further analysis on recent violence against the oil sector in the country please read this article.

There was also a decrease in violent unrest recorded in Kurdistan over the past week, although protests continue to take place in Sulaymaniyah. Kirkuk has been relatively quiet (from an Iraq perspective at least) although it has suffered at least three bomb attacks targeting police and civilians. Underlying inter-communal tensions are also continuing to brew, with the debate over who should govern the province – Baghdad, the Kurdish authorities or some devolved regional entity – far from being resolved. Unless the issue is tackled properly and with inclusive and consultative measures for the relevant communities a rise in violence should be anticipated in the city further down the line.

Baghdad saw a rise in violence last week with bombings scattered throughout the city. Most of the explosive devices used were small and tended to inflict injuries rather than fatalities but they nonetheless pose a concern, not least because terrorists are evidently still able to operate undetected in almost every district of the capital. Otherwise, the rest of the central provinces saw a decline in violence. With the exception of a prison riot in Tikrit there was little in the way of violent unrest, although further sporadic protests should still be anticipated in city centres in the region.

The south of the country was relatively quiet over the past week. Several arrests were made around Amarah in Maysan province and the police managed to confiscate illegal weaponry and smuggled goods in the area but there was little in the way of violent attacks. Like the central provinces there was also a decline in unrest in the region, although further protests should nonetheless still be anticipated in city centres such as Basrah and Nassiriyah.