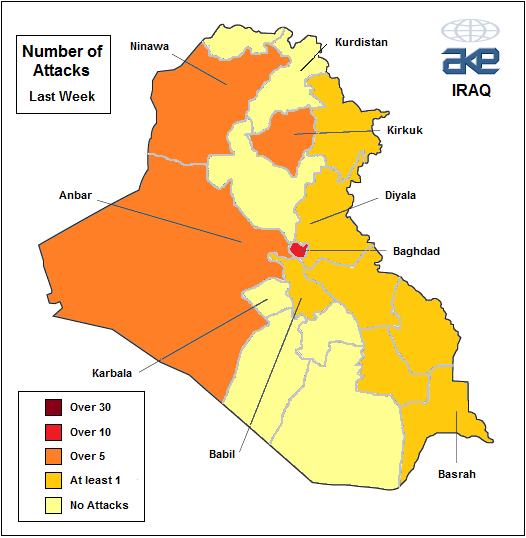 By JohnDrake on 14th April 2011 in Weekly Security Update

There was a fall in the number of violent incidents taking place in Iraq last week, although there was a spate of attacks around the centre of the country on Monday, leaving a number of people dead. In general, violence remains concentrated in Baghdad, the dstricts immediately surrounding it, and the northern city of Mosul. Last week also saw a scattering of incidents in Kirkuk and dispersed throughout the south of the country, although the southern region was nonetheless still largely calm.

The Iranian military shelled an isolated mountainous area of northern Sulaymaniyah province last week, although no casualties were reported during the incident. Cross-border military activity by both Iran and Turkey in search of Kurdish terrorists will continue along the border over the course of the summer, but foreign personnel, investors and indeed the vast majority of Kurdish residents will remain unaffected. The activity remains restricted to very isolated areas. Otherwise in the north conditions remain hostile in Mosul, while Kirkuk continues to see occasional attacks by militants and clashes between antagonistic community groups. Ba'aj district in Ninawa province saw the first suicide attack in north of the country in five weeks. Ninawa and Ta'mim provinces currently see around one suicide bombing every five to six weeks. The latest attack targeted a police patrol and left three people dead and seven injured.

Last week saw a fall in violence in the centre of Iraq, although Monday and Tuesday saw a spate of incidents in and around Baghdad. The Iraqi security forces clashed with the Iranian residents of Camp Ashraf in Diyala province, and residents of the camp are now likely to be deported to another country over the coming months. The camp is situated near Khalis and contains many members of the People’s Mujahedin of Iran (PMOI) – a militant organisation intent on bringing down the regime in Tehran. Residents have expressed an interest to return to Iran but it is more likely that they will be moved on to a third country. Violence at the camp has continued to occur sporadically over recent years but it has not overtly threatened private business interests in Diyala province. The Iraqi security force clashes with the residents of the camp is telling of the growing relationship between Baghdad and Tehran. Previously, the PMOI was welcomed by the regime of Saddam Hussein because they opposed rival Iran. Now the relationship between the two countries has improved considerably, although Iranian troops have previously crossed the border into Iraq, both at the Fakkah oilfield in the south, and last week in Kurdistan (please see above). Iraq’s diplomatic relations appear more byzantine than ever.

Last week saw incidents scattered throughout the capital. There were over 20 separate bomb attacks, concentrated mainly in the northern district of Qahirah and its environs, the western district of Mansour, the southern district of Dourah and the south-eastern district of Za'faraniyah. Conditions continue to fluctuate in the city, but there remains a consistent trend of targeted assassinations against civic employees and senior members of the security forces. Sticky bombs (magnetic explosive devices affixed to vehicles) and shootings are the most common tactic of the responsible assassins.

Incidents are still far fewer in the southern provinces of Iraq than in the centre and north, but roadside attacks and occasional mortars continue to pose a concern. As mentioned in last week's update, militants have been using Explosively Formed Projectile (EFP) weaponry to target military convoys. These pose a major risk as they can pierce armoured car exteriors, causing extensive harm and damage inside the targeted vehicle. In many cases it should be considered preferable to travel low profile in the south of the country, avoiding the eye-catching use of heavily armoured vehicles and convoys. An armoured car will provide a degree of protection from a roadside blast, but it cannot protect against EFP weaponry while a low-profile vehicle is unlikely to be spotted and targeted in the first place. In security, an armoured (and expensive) response to security threats does not necessarily equate to the most effective means of protecting a company's staff and assets.

John Drake is a senior risk consultant with AKE Group, a British private security firm working in Iraq from before 2003.Further details on the company can be found at www.akegroup.com/iraq