Security measures have been heightened in Iraq following the killing of Osama bin Laden. The authorities are expecting the possibility of a retaliatory attack by radical jihadists in response to the news of his death. However, the impact of the killing may be relatively limited.

Al-Qaeda is neither the powerful organisation it once was in Iraq, nor the sole source of political violence in the country. Over recent years its influence has been gradually eroded by a US surge, the establishment of Iraqi Awakening Councils and ongoing improvements in the professionalism of the national security forces. The group lacks the capability to initiate the same number of attacks as it did between 2003 and 2007. It has provided bloody reminders of its strength over the past year, with gruesome attacks on a church in Baghdad in October, and on a provincial government building in Tikrit in March, but the frequency of attacks attributed to the group is far lower today than it was four years ago.

The inspirational leader of the global al-Qaeda movement has had a prominent role in post-invasion Iraq through his repeated messages calling for violence against foreign occupiers and apostates. However, al-Qaeda in Iraq is now far more of a domestic terror organisation. It is no longer as internationally connected as it once was and a greater proportion of its leaders and fundraisers are Iraqi than ever before. It is no longer reliant on the leadership and direction of al-Qaeda figures abroad. It drew inspiration from Osama bin Laden, but did not follow his orders. His death will therefore have little impact on the command and control structure of the organisation. Attacks are therefore likely to continue.

Even within Iraq, the al-Qaeda movement is an amalgamation of affiliated cells, rather than a tight structure with a rigid chain of command. Individual members are often able to plan and initiate attacks with very little interaction with more senior figures. In 2010 several key leaders of al-Qaeda in Iraq were killed and arrested. While reprisal attacks were anticipated, few occurred. Similarly while some expected a significant reduction in radical jihadist attacks, incidents persisted.

Sadly, al-Qaeda is not the only threat group which Iraq has to contend with. There are numerous other violent organisations, including a large number of Shi’ah militant groups, completely unaffiliated with the global al-Qaeda movement. They will continue to conduct attacks around the country regardless of the killing of bin Laden. 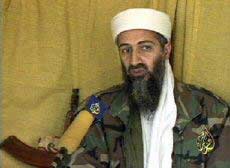 The security environment will therefore remain problematic in Iraq, although the obstacles posed by this can still be overcome. Companies which implement proper risk mitigation measures have been able to do business safely and profitably in the country regardless of whether or not Osama bin Laden is dead, alive or influencing terrorist activity in the country.

3 Responses to The Death of Bin Laden