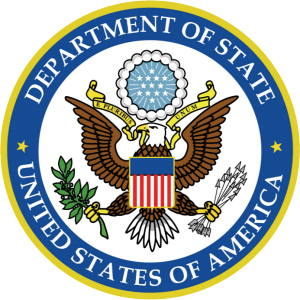 The U.S. Department of State has made a statement about the "substantial investment and great sacrifices" that the United States has made to "bring about progress":

Since 2003, the United States has been an active partner to help Iraqis strengthen their democracy, build civil society, improve security, and re-integrate fully into the regional and global community and economy. Since 2009, we have worked through the U.S. Iraq Strategic Framework Agreement to reinvigorate this partnership in a range of sectors, including democracy-building, security, education, energy, trade, health, culture, information technology, law enforcement, and judicial cooperation.

We have made a substantial investment and great sacrifices to bring about progress. We have strengthened Iraq’s democracy, rule of law, and civil society. We have helped rebuild its security infrastructure and helped Iraq rejoin the international community after decades of isolation. Our support – with significant assistance from international partners since 2003 – has helped Iraq successfully conduct five major elections or referenda since 2004, including two parliamentary elections. Over 12 million Iraqis voted in the 2010 parliamentary election – a 62 percent turnout. The U.S. has also substantially assisted Iraq’s new parliament, the Council of Representatives, in building core capacity and competence. State and USAID programs have helped Iraqi civil society – including women’s groups, human rights organizations, budget transparency entities, and the media -- play an active role in Iraq’s democracy. We are also supporting Iraqi parliamentary efforts that produced the region’s most progressive non-governmental organization law. In December 2010, the United States also helped Iraq secure UN Security Council termination of most Chapter VII sanctions against Iraq, bringing Iraq into a more normal relationship with the community of nations.

Since November 2008, our security relationship with Iraq has undergone a significant transition. Building on the success and sacrifice of our troops who partnered with Iraqi Security Forces to bring an end to sectarian fighting and combat insurgency, we have ended the combat mission, reduced our troop level to below 50,000, and handed the lead for the security of their nation to Iraqi Security Forces. The Iraqis have developed the capacity to successfully provide internal security, as our forces have shifted from a combat role to a role focused on advising and training.

The U.S. has provided training, technical expertise, and equipment to bolster critical rule of law capacity in Iraq, focusing in particular on the police, corrections service, and judiciary. This investment has improved the Iraqi government’s ability to provide for the humane treatment and legal rights of its citizens, while also properly incarcerating criminals and insurgents.

On the economic front, we have worked to promote growth and reform in multiple sectors of Iraq’s economy. We have helped the Iraqis realize better management in key ministries with procedural and institutional reforms and training on international procedures and standards. U.S. programs have produced or supported key benchmarks:

Our assistance has helped Iraq combat corruption with programs for integrity institutions: the Board of Supreme Audit, the Commission on Integrity, and the Inspectors General. Our assistance also helped Iraq produce and begin to implement a 2010 comprehensive national anti-corruption strategy.

We have promoted long-term economic growth, political development, and strong cultural links to the U.S. by assisting the educational sector in Iraq. Iraq has the largest Fulbright Foreign Visiting Student Program in Middle East, and the International Visitor Leadership Program in Iraq is the largest in the world. Iraq is the eighth-largest foreign government contributor to the Fulbright program. Additionally, USDA has cemented links between Iraqi universities and U.S. land grant universities to build an agricultural extension program.

One Response to Strengthening Iraq