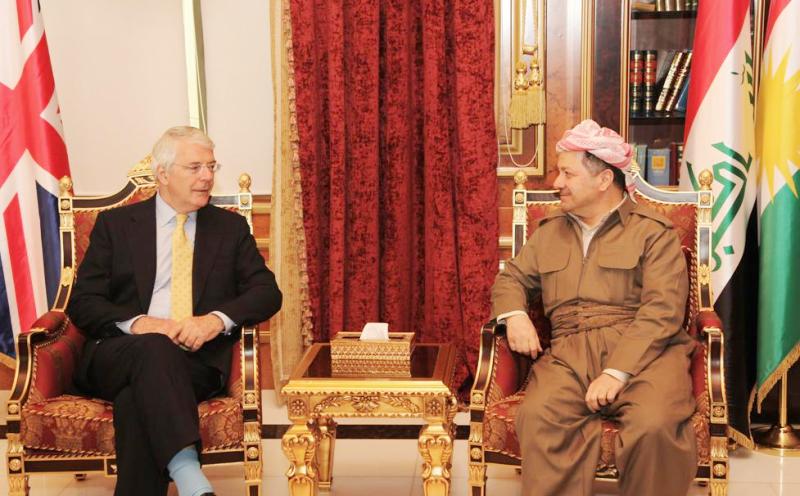 Former British Prime Minister Sir John Major concluded a historic three-day visit to the Kurdistan Region in which he received a warm welcome from officials and the public and praise for the bold decision he took in 1991 that laid the foundations for the progress and achievements in Kurdistan today.

During his visit, the former British Prime Minister and Kurdistan’s President Masoud Barzani inaugurated the British Consulate General, upgrading it from an embassy office at a celebration to mark the British Queen’s birthday.

President Barzani said, "We are all honoured to have Sir John Major here in Kurdistan to participate in the official opening ceremony of the British Consulate General. This will no doubt further strengthen the solid relationship between Iraq, and particularly the Kurdistan Region, on the one hand and the United Kingdom on the other hand. The people of Kurdistan will never forget what you have done for them."

In his address to the guests, Sir John said, “I think Her Majesty would share with me the view that there are other reasons to celebrate in Kurdistan today. If I had ever had the slightest doubt 20 years ago, about the safe haven’s policy, that doubt would have been removed by the enormous advances that have been made in Kurdistan since then.” Later, in a speech to the Kurdistan Parliament, he stated, “This consulate represents a settled relationship. One based on political engagement, cultural exchanges, educational links and bilateral trade.”

The former Prime Minister had meetings with the Speaker of Parliament, MPs, the Prime Minister, and several other ministers and officials. He addressed the Kurdistan Parliament and later the University of Kurdistan Hewler where he received an honorary doctorate in politics and international relations.