By JohnDrake on 6th July 2011 in Weekly Security Update

Levels of violence fell in Iraq last week, but conditions continue to fluctuate and the overall number of attacks has risen gradually since the beginning of the year. Over the past two months the country also appears to have experienced a violent week, followed by a quiet week, in fairly regular alternation. It could be the case that a series of attacks are planned and executed by various militant groups, then the authorities temporarily heighten their security measures in response, only to relax them once again after a few days, providing a renewed opportunity for militancy. Despite being one of the quieter weeks, the last seven days have nonetheless seen kidnappings and a series of fatal indirect fire (rocket and mortar) attacks.

North
Last week saw conditions ease slightly in the two northern provinces of Ninawa and Ta’mim while Kurdistan saw no violence at all (as per usual). Conditions in the cities of Mosul and Kirkuk nonetheless remain hazardous. Last week a North Oil Company employee was shot dead near Kirkuk while the police killed one criminal and arrested another as they attempted to siphon oil from a pipeline near Mosul. The oil sector remains a prized target for militants and criminals alike, although the killing of the NOC worker could have been related to a variety of issues such as crime or inter-communal tension, not directly linked to his employer. 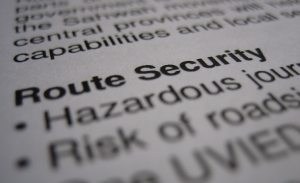 The central provinces saw a tentative increase in the number of illegal checkpoints being used over the past week. Cars have been attacked and occupants killed, injured and kidnapped, including five individuals abducted from western Anbar province on 2 July. AKE advises personnel to stick to main, well patrolled routes when travelling in at-risk areas. Try to travel during daylight hours and be alert to suspicious activity at checkpoints up ahead. For further information please contact [email protected].

Three US soldiers were killed in an indirect fire attack on their unit in Wassit province last week. Attacks against American troops have recently increased with June being the bloodiest month for the force since 2008. It is likely that militants are trying to pressure Washington into sticking to the Status Of Forces Agreement (SOFA) which dictates that the US military must withdraw from the country by the end of the year.

Baghdad saw a decline in attacks, but a similar indirect fire incident, possibly aimed at US interests in the Green Zone during 4th of July celebrations, landed near the Rashid Hotel, killing and injuring a number of employees at the site. While many would-be investors might consider the Green Zone to be the safest part of the capital it sees occasional rocket and mortar attacks. Indeed there are districts in the ‘Red Zone’ which see far fewer security incidents. Potential investors may therefore wish to consider office space and accommodation beyond the fortified Green Zone. For some organisations a lower profile site beyond the highly symbolic and politically important city centre may be preferable for basing their operations in the city.

South
The security forces in the southern provinces have increased their levels of vigilance after a series of high profile attacks in the region during the past month. After one such attack against a police compound in Basrah there has been an increase in checkpoint searches, with one such search uncovering a vehicle laden with explosives in Qadissiyah province mid-week. Several arrests have also been made around Basrah while a number of rockets and mortars are also reported to have been confiscated. Roadside bombings and shootings have gone into decline in the south of Iraq, but indirect fire attacks on fortified facilities, as well as occasional complex suicide attacks have seen a rise over recent weeks.

One additional issue which may be of concern is that the Reconstruction Operations Centre (ROC) in Iraq is no longer issuing its daily intelligence. These reports were regularly used by organisations involving in the rebuilding of Iraq. Those who still have a requirement for daily updates on the situation are again advised to contact [email protected].

John Drake is a senior risk consultant with AKE, a British private security firm working in Iraq from before 2003. Further details on the company can be found here. You can also follow John Drake on twitter here.