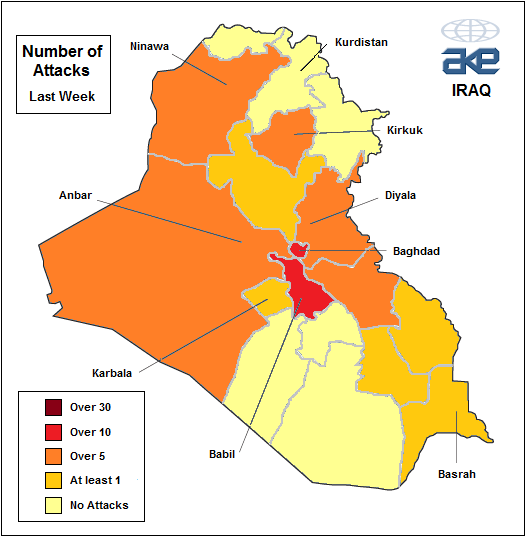 By JohnDrake on 14th July 2011 in Weekly Security Update

Levels of violence rose slightly in Iraq last week. Incidents were concentrated along a belt stetching from Ramadi in Anbar province to Ba'qubah in Diyala province, with the majority concentrated in Baghdad. Mosul and Kirkuk in the north also saw a spate of attacks (as per usual). At the time of writing many pilgrims are travelling to Karbala to commemorate Sha'abaniyah and there is a risk that they may be targeted by terrorists. The US military also continues to sustain attacks, with rockets targeting fortified facilities (including the Green Zone) and bombings targeting patrols. This targeting will likely continue so long as the controversial Status Of Forces Agreement remains a subject of negotiation.

North
The Kurdish provinces remained quiet last week, while in contrast the cities of Mosul and Kirkuk saw a series of violent incidents. In Mosul incidents were relatively concentrated within the city, whereas Kirkuk saw a number of attacks around the outskirts, including one explosive device which was made safe by the authorities along the main highway to Baghdad. Safety conditions remain a paramount concern for those travelling around the province by road.

Centre
The centre of the country saw a rise in attacks over the past week, including an increase in suicide bombings. Baghdad was quieter than normal but the districts surrounding it saw a worsening in conditions, particularly in Babil province which saw more attacks than usual. This trend may continue over the coming days as terrorists might attempt to attack Shi’ah pilgrims heading towards Karbala to commemorate Sha’abaniyah (culminating on 15 July). As with previous pilgrimages they are often regarded as an easy terrorist target. Travellers may also experience heightened security on routes in the central region, while curfews may be imposed in the event of any large-scale violence.

South
The south remains quieter than the central region but the US military has seen a rise in attacks against it over recent weeks. As politicians discuss a possible extension of the Status Of Forces Agreement (SOFA) militants will likely remain keen on demonstrating their animosity towards the US military presence in the country. Further attacks including roadside bombs and mortars against patrols and bases should be expected as a result.