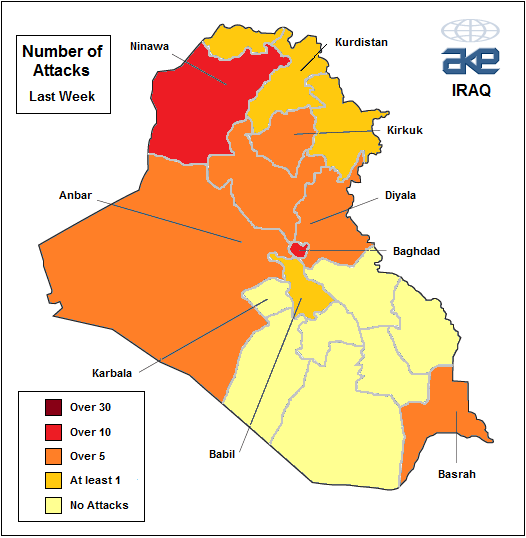 By JohnDrake on 1st September 2011 in Weekly Security Update

While last week was bloody in Iraq, levels of violence actually fell slightly in the country from the week before. Nonetheless, conditions should still be regarded as hostile, with dozens of people killed in a series of suicide bombings towards the end of Ramadan. As well as several such attacks in the centre of the country, one also hit the comparatively quiet city of Basrah in the south. In the north of the country the Turkish military also continues to target Kurdish terrorists based in the mountains.

While the holy month of Ramadan has often seen ceasefires signed between Iran, Turkey and the Kurdish separatists in the past, 2011 saw continued Turkish attacks against suspected PKK installations. However, while various political figures continue to criticise the action, and a number of civilians have been killed or had their property damaged, the operations are having little impact on the majority of businesses operating in the region. Conversely, the adjacent cities of Mosul and Kirkuk remain very hostile, with numerous bomb, shooting and even mortar attacks around the two cities last week. The police and Iraqi army remain the primary target for local militant groups, but an oil protection force officer and an employee of Bayji refinery were also targeted in separate attacks last week. All sectors should be considered at risk, with the oil and gas sector remaining an attractive target for criminals and terrorists alike.

Levels of violence remain consistently high in the centre of the country, with three suicide attacks recorded last week, one in Fallujah, one in Karmah, and one in the west of Baghdad, targeting a large and high profile Sunni mosque. There will remain a risk of further suicide attacks after al-Qaeda in Iraq threatened to carry out 100 such attacks from the middle of Ramadan. While similarly bold statements of intent have not been fulfilled in the past the risk of mass casualty spectacular attacks should nonetheless be considered elevated at this time. Personnel should therefore avoid large gatherings of people, especially around religious sites, government facilities, security force installations and commercial areas, as these are the most attractive targets for terrorists intent on inflicting mass casualties.

Even the normally quiet south of the country is at risk of such attacks, with one of the suicide bombings recorded last week occurring in Basrah. The region should not be considered immune from Islamist terrorism, despite the fact that suicide bombings are normally associated with Sunni groups, whereas the southern provinces are predominantly Shi’ah. Personnel are advised to maintain vigilance in the region and bear in mind that there are no grounds for complacency.

AKE will be exhibiting at Offshore Europe in Aberdeen between the 6th and 8th September. Feel free to visit stand 5C110 where you can meet the author. If you would like to register to attend as an AKE guest for free please complete your details here.

One Response to Weekly Security Update for 1st September 2011