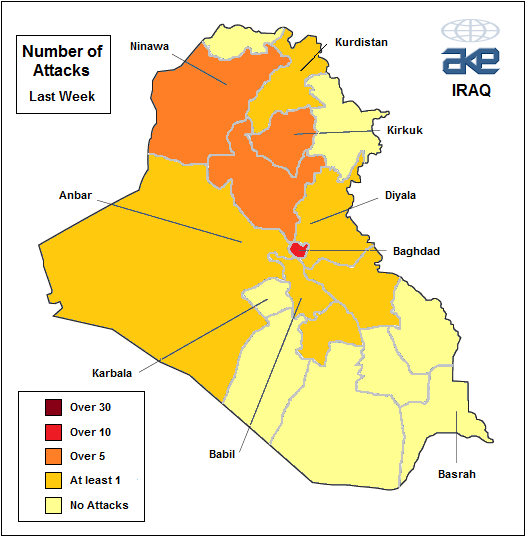 By JohnDrake on 14th September 2011 in Weekly Security Update

Levels of violence rose slightly in Iraq over the past week, with attacks concentrated in Baghdad and the districts surrounding it, as well as the two northern cities of Mosul and Kirkuk. There was also a slight spike in activity around the town of Dujayl in Salah ad-Din province. While bombings around the country left a number of people dead, small arms attacks should be considered a particular concern at present. Their frequency has continued to rise over the past five weeks. Last week the tactic left dozens of people dead, mostly in the central provinces.

There was a slight rise in levels of violence in the northern provinces of Ninawa and Ta’mim last week, with militant activity concentrated in Mosul and Kirkuk. While no kidnappings for ransom were reported around the country, at least one person was found dead in Mosul having been abducted over the course of the week. Meanwhile, civilians continue to suffer as a result of Turkish and Iranian military operations on the borders of Kurdistan, which may prompt disquiet over the coming days and weeks. However, the majority of business operations and personnel remain unaffected in the region.

Conditions worsened in the centre of the country over the past week, with several people killed and injured in attacks concentrated in eastern Baghdad, southern Salah ad-Din province and eastern Anbar province. Among those killed in the various small arms attacks reported around the region were 22 Shi’ah pilgrims, pulled over from their minibuses and shot dead by militants in Anbar province. Several Iraqi troops were also killed in an ambush close to Hadithah on 6 September. The authorities also recovered at least 40 bodies from a mass grave in Salah ad-Din province. They had been murdered by a criminal gang over a two-year period, according to police statements. In Baghdad conditions remain quieter than earlier in the year, but targeted attacks against ministry employees, members of the security forces and even shops selling alcohol continue in the city centre. Last Friday also saw a demonstration by protestors demanding action on various issues, including the provision of security, public services and a firm statement on the US Status of Forces Agreement.

The situation remains quiet in the south of Iraq, but readers should not take this as grounds for any complacency. Militant and criminal organisations remain active in the region, evidenced by two assassinations in Qaddisiyah province last week. A tribal sheikh and a former member of the provincial council were both shot dead by unknown assailants in attacks in Diwaniyah.

You can obtain a free trial of AKE’s intelligence reports here. You can also follow John Drake on twitter here.