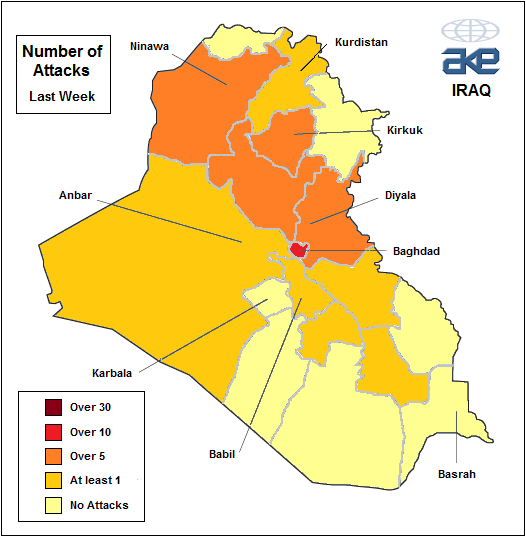 By JohnDrake on 5th October 2011 in Weekly Security Update

Levels of violence fell slightly in Iraq over the past week. There was a rise in the number of small arms attacks, mainly in Baghdad and the neighbouring province of Diyala. There was also a slight rise in the number of indirect fire attacks countrywide, which left two people dead (including a US soldier) and seven injured around the country. Over the past fortnight Iraq has also seen a rise in the number of kidnap for ransom incidents taking place, mainly in the central and northern provinces of the country. More positively, however, there was a fall in levels of violence in the country over the course of the third quarter of the year (July-September) according to AKE research. At least 676 people were killed during the period, as a result of over 700 separate terrorist and militant attacks.

Turkish air force bombardment continues in isolated parts of the Qandil Mountains in Kurdistan but no casualties or excessive damage to private property were reported last week. Activity is likely to continue until winter conditions render fighting too difficult to pursue, usually around the middle to end of November. On 2 October the police managed to free three Christians and a Turkmen civilian who had been abducted nine days previously in the Daquq area of Ta’mim province. A ransom is not reported to have been paid for their release and their abductors have not been caught at the time of writing. Otherwise, as detailed below, abductions continue to take place around the country.

Targeted killings of ministry employees and senior members of the security forces continue in Baghdad. Militants are regularly using guns with silencers to attack their victims, most of whom are likely to have been singled out and monitored in advance of an attack. Personnel are advised to vary their routes, routines and appearance if they consider themselves to be at risk of such an attack. Travelling in the same car along the same route to work or home at the same time every day will make it easier for a militant to plan an attack against you.

Sahwah fighters continue to suffer attacks from suspected members of al-Qaeda in Iraq in the central provinces while kidnap for ransom incidents appear to have recently increased.  A civilian was abducted in northern Salah ad-Din province on 30 September while the sister of a Sahwah fighter was abducted by militants in Diyala province on 1 October. AKE will publish its next kidnap brief in the coming days. If you would like to sign up to receive a copy you can sign up here.

Last week in Qadissiyah province militants riding a motorbike shot at a mosque Imam in central Diwaniyah, injuring him and killing a member of his family. Details have not yet emerged over the motivation for the attack but he may have been targeted for having supported one political party over another, and expressed his support publicly during a sermon. Rival political organisations will continue to struggle for dominance in the southern region, and while resultant violent incidents will remain infrequent, organisations should be mindful of the undercurrents of political manoeuvring in the otherwise relatively quiet region.

John Drake is a senior risk consultant with AKE, a British private security firm working in Iraq from before 2003. Further details on the company can be found here while AKE’s intelligence and political risk website Global IntAKE can be accessed here.  You can obtain a free trial of AKE’s intelligence reports here. You can also follow John Drake on twitter here.