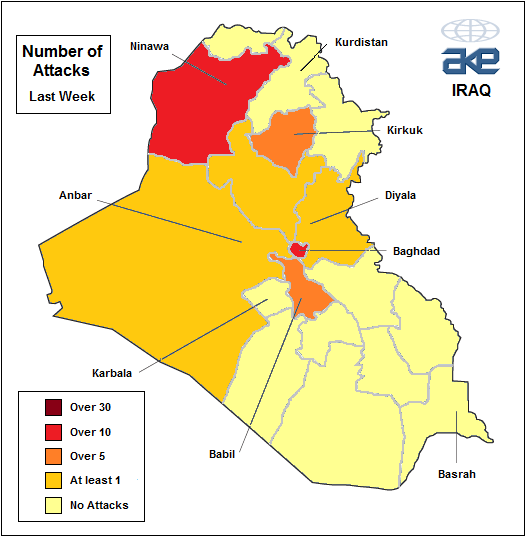 By JohnDrake on 24th November 2011 in Weekly Security Update

Levels of violence rose in Iraq over the past week, particularly in Mosul and the central provinces. There was a rise in bomb attacks, a steady number of shootings and at least two injuries caused by indirect fire (rockets and mortars). At least one person was kidnapped in the north of the country. The head of a local journalist association was shot and injured in Diyala province, while the police managed to stop suicide bombings in both Baghdad and Mosul.

North
Mosul saw more violence than Baghdad last week, while the divided and hotly contested city of Kirkuk has also seen an increase in violence over recent days. Inter-communal tensions appear to be rising and many are concerned for prospects for stability once the US military leaves. Further north there have been several cross-border Turkish military operations in the Qandil Mountains over recent days but no civilian casualties or property damage have been reported. Such operations tend to go into decline at this time of year as winter weather conditions start to set in, making it difficult to fight. 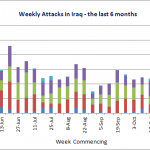 Centre
There was one attempted suicide bombing in Baghdad last week, but the police managed to stop the would-be terrorists before they had the chance to detonate their significant amount of explosives. Otherwise the capital has been relatively quiet. Elsewhere in the central provinces there have been at least three separate attacks on US military interests over the past week, and anxieties are growing countrywide over the prospects for stability once American troops have left. Militancy is likely to gradually rise following their departure, but it remains to be seen whether or not anticipated ebb and flow of violence will trigger any major escalation in militancy and civil unrest. Security gains of the last few years will undoubtedly remain fragile for much time to come.

South
There were no major incidents of violence recorded in the south of Iraq last week. Conditions remain far quieter than the central and northern provinces, although this should not be taken as grounds for any complacency. Security is likely to be heightened in Basrah over the coming days as the city hosts an international oil and gas conference. This will significantly reduce the risk of violence over the period although organisations should still ensure that employees are properly trained, insured and protected prior to a journey to the area. For any security and logistical assistance for the conference readers are advised to contact the AKE Iraq office at [email protected].