By JohnDrake on 28th December 2011 in Weekly Security Update

Summary
Levels of violence rose in Iraq over the past week, with dozens of people killed and injured in a series of attacks in Baghdad on 22 December. Meanwhile, the political crisis between senior politicians also endures, posing a significant risk to overall national stability and raising the possibility of major internal strife over the course of the coming year.

Statistics
In total, at least 105 people were killed and 253 injured in nationwide violence last week, which was concentrated in the capital, as well as the northern cities of Kirkuk and Mosul. At least 48 separate bomb attacks left 82 people dead and 228 injured. Small arms fire attacks left 14 people dead and 13 injured. 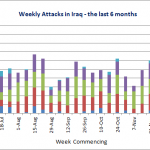 Weekly Attacks in Iraq - the last 6 months. Note the notable rise in the number of incidents reported last week.

Kidnap Risk
Last week the US authorities issued a statement warning of the imminent risk of kidnap posed to American nationals. Evidently kidnap remains a major risk in the country and foreign personnel are advised not to become complacent. Iraqis continue to be abducted on a regular basis. The Iraqi authorities managed to free two kidnap victims in separate incidents in the north and centre of the country last week and dozens more are likely to be taken over the coming months. If you would like to receive AKE’s quarterly kidnap brief please complete your details here.

Baghdad Violence
There were several attacks over the course of 22 December in Baghdad, which left up to 70 people dead and almost 200 injured. The bombings, which were later claimed by al-Qaeda in Iraq took place in the districts of Abu Dshir, Adhimiyah, Allawi, Amil, Bayaa, Dourah, Ghazaliyah, Harthiyah, Jihad, Karradah, Mansour, New Baghdad, Qaddisiyah, Qahirah, Sha’ab, Shu’lah, Shurtah and Yarmouk as well as along Abu Nawas street, Maghrib street and Mohammed al-Qassim highway. Targets included a garage, school, hospital and the integrity commission office in Karradah, as well as gatherings of civilians, targeted on an indiscriminate basis.

Warning Signs
Previous AKE reports indicated that the authorities were expecting another mass-casualty terrorist attack and the country was indeed statistically overdue. What needs to be determined now is whether or not this latest spate of attacks, following the US military departure, signals a change in the tempo of violence. Organisations should review their security measures in light of the potential for a deterioration in conditions and be prepared for the frequency of attacks to increase from now on. Even organisations working in normally well patrolled districts such as Karradah, Jadriyah and even the International/Green Zone are reminded that they are not immune from risk. Indeed, it is precisely these districts which should be regarded as possible targets, not least because of their high profile and political weight.