By JohnDrake on 18th January 2012 in Weekly Security Update

The number of attacks taking place in Iraq actually fell last week. Nonetheless, the associated number of casualties was still much higher than average. At least 100 people were killed and 261 injured in nationwide incidents, several of which targeted Shi’ah pilgrims gathering to commemorate Arba’een. Violence was concentrated in the cities of Mosul and Kirkuk in the north, as well as Ramadi and Ba’qubah in the central provinces.

North
In Ta’mim province on 13 January a suicide bomber driving a car laden with explosives attacked the home of a senior police officer in northern Kirkuk, injuring two people. The only fatality was the terrorist himself, which is relatively low for a tactic often responsible for dozens of killings. Kirkuk does not see regular suicide bombings at present but it has done in the past. The tactic could become more common in the area in the future if inter-communal relations deteriorate and violence rises. Another suicide attack in the northern region took place in Mosul on the same day. Police raided a house in the west of the city, shooting dead two suspected militants inside before a third man detonated an explosive belt, injuring two of the officers. 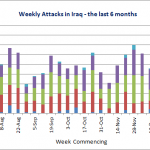 Centre
Co-ordinated attacks struck Anbar province on 15 January when militants detonated bombs and attacked police stations and a power facility using guns and RPGs. The police responded and clashes continued for some time in what bears the hallmarks of similar attacks by al-Qaeda in Iraq. On a number of occasions over the past two years terrorists have detonated bombs around a targeted building, then attacked using firearms and suicide belts with the intent of taking hostages temporarily and then causing multiple casualties. Most of the assailants die during such attacks.

Baghdad was relatively quiet last week, with a lower than normal number of incidents recorded in the city. The security forces were on high alert for Arba’een and are believed to have prevented several attacks. Nonetheless, a suicide bomber still managed to kill several people in an attack in the south of the city, indicating that even with the authorities in a state of vigilance, terrorists are still able to engage in open violence.

South
At least 53 people were killed and 130 injured in a suicide bombing targeting Shi’ah pilgrims in Basrah on 14 January. While three more suicide bombings in the capital and north of the country left nine people dead and 32 injured but it was the southern incident which claimed the most lives. While the authorities can claim credit for having prevented a number of attacks over the course of Arba’een, they will nonetheless be blamed by many for failing to protect members of the public. Stops at vehicle checkpoints may now increase on main routes in the southern provinces and cars with number plates from the central region may be specifically singled out for stop and search exercises. Personnel are advised to comply and ensure that all the necessary paperwork and vehicle registration is in order.