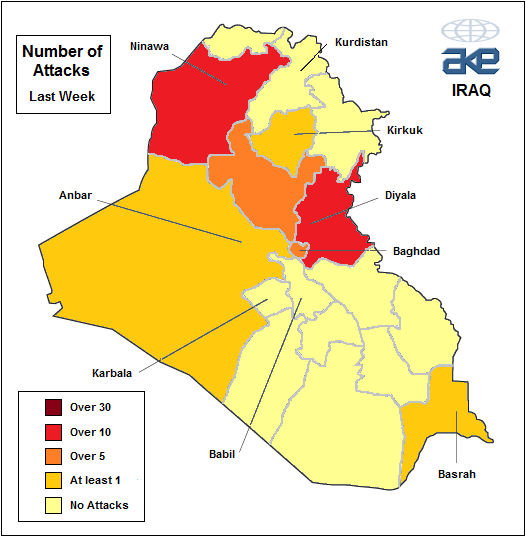 By JohnDrake on 9th February 2012 in Weekly Security Update

Levels of violence fell in Iraq last week. At least 18 people were killed and 48 injured in nationwide incidents, making it the quietest week in at least two months. A total of 26 bomb attacks left six people dead and 41 injured. They were mainly low-yielding in terms of casualties and were likely designed to intimidate rather than cause mass casualties. A notable fall in the number of small arms fire attacks left seven people dead and four injured – a low weekly figure for the country. Activity was concentrated in Baghdad, Mosul and the province of Diyala. Kurdistan saw no incidents, while the south saw a number of police operations, one of which resulted in a violent clash with a terrorist in Basrah, which left a policeman dead and two injured.

North
There has been a rise in the number of sticky bombs (UVIEDs) used by militants over the past two weeks, mainly in the centre and north of the country. One of the latest victims of the tactic last week was a North Oil Company employee, killed in an attack on his car in Ta’mim province on 2 February. There was also at least one indirect fire attack (rockets and mortars) in Kirkuk but it did not cause any casualties. 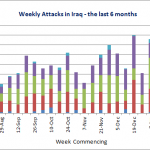 Centre
Baghdad and Diyala province were two of the most hazardous parts of the country last week, although the capital was still quieter than normal. A suicide bombing in Ba’qubah on 30 January killed three people and injured three more. The police in Baghdad also likely prevented a significant attack when they shot dead three people wearing suicide vests in the west of the city on 2 February.

South
Ongoing police operations targeting suspected terrorists and criminals continue to highlight the fact that the south of the country is not entirely ‘safe’. The police conducted raids targeting suspected kidnap groups in Basrah on 6 February. Operations targeted homes in the Abu al-Khasib and Qibla areas of the city, with at least one female captive reported freed by the authorities. Following a grenade attack during a police operation over a week ago in which one officer was killed and two more injured personnel are reminded that the relative quiet of Basrah belies the fact that threat groups still have a presence in and around the city.