For some time, Iraqi politicians have been discussing a bill proposed by President Jalal Talabani, of the Kurdistan Alliance, on the subject of administrative changes to boundaries of governorates that were altered by the Baath [Ba'ath] regime.

In principle, this discussion has been kept separate from the bigger question of article 140 of the Iraqi constitution on disputed territories. Some politicians have presented the bill as a preparatory step towards the implementation of article 140. Others, including Prime Minister Nuri a-Maliki, have cited the Talabani bill as something that necessitates postponement of the creation of federal regions in parts of Iraq affected by the bill.

For a long time, the Talabani bill was known mainly through paraphrases. By now, it is however clear that the proposed law is very short and basically just involves the cancellation of all “unjust” boundary changes by the former regime in pursuance of its “political goals”.

If implemented to the letter, this would mean altering the administrative boundaries of Iraq to the pre-1968 situation, roughly as on this map from 1966: 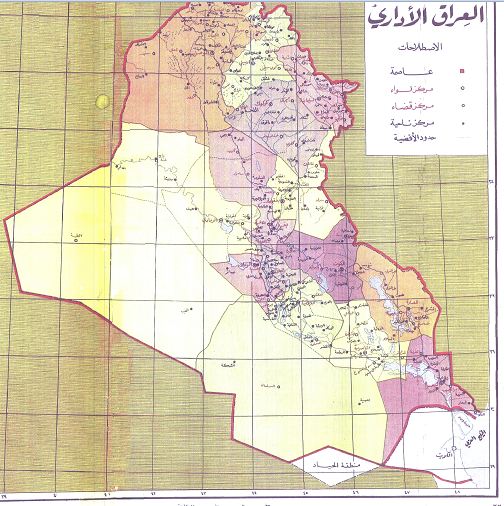 Baghdad would swallow Salahaddin, Kirkuk would grow a good deal, Najaf and Muthanna would cease to exist.

Importantly, in a consistent implementation, Kurdish-majority Dahuk would also revert to Mosul/Nineveh! Now, presumably that is not what Talabani wants (the Kurds mainly want a bigger Kirkuk), and presumably he is using the words “unjust” and “political aims” in order to create a justification for going back to 1968 generally speaking – but not, of course, when it comes to land given to the Kurds by the Baathists. But that doesn’t make a lot of sense. Dahuk was given to the Kurds by the Baath precisely in pursuance of political “aims”, namely that of creating the first zone of administrative autonomy for a Kurdish minority in any modern Middle Eastern state. To the many Arabs in northern Mosul who suddenly found themselves in a Kurdish-majority governorate, the decision may well have been seen as “unjust” first and foremost.

That is why the new Talabani draft law is just another article 140 in disguise. It is trying to create a cloak of objectivity but it has in fact exactly the same failings of subjectivity as article 140 has – disputed territories exist only in the eye of the beholders. As such, the new draft law of Talabani is likely to prove inflammatory to the derailed Iraqi political process rather than a means of facilitating greater rapprochement.