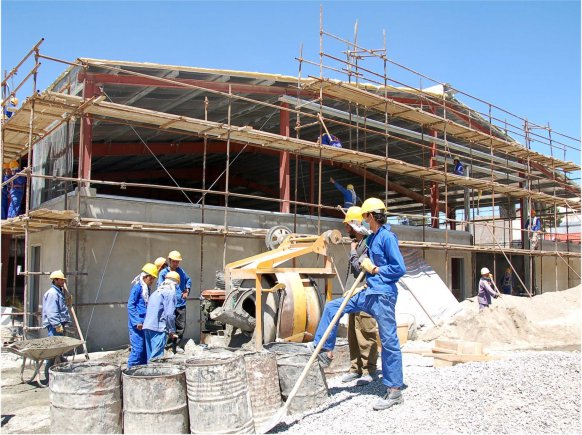 The projects fall into two categories:

"Two of our most prominent projects are for the Ministry of Health: at Basrah Children's Hospital and at the Maysan Hospital," Schmidt said. "At the children's hospital, work includes facilities operation and maintenance through an architect-engineer contract and procurement of additional medical equipment. This is the first hospital in Iraq dedicated to the treatment of cancer in children."

The continued assistance is important because U.S. and donor countries have invested more than $166 million to construct and equip Basrah Children's Hospital. The Maysan Hospital will also provide critical care for Iraqi citizens since it is being built in a governorate where there is an acute lack of medical facilities, Schmidt said. The $12 million hospital will have 80 patient beds, an emergency department, two physician resident buildings, and supporting infrastructure.

In another high-visibility project, "The district continues to support the Fallujah waste-water treatment plant by providing operations and maintenance support and training for the staff that operates it," Schmidt said. "In addition, we oversee a Department of State grant to the Ministry of Municipalities and Public Works for house connections and construction of a trunk line and pump station at the waste-water treatment plant."

Because the U.S. government has invested $108 million in the construction of this system, the follow-on actions associated with the plant are critical for its operation, Schmidt said. The project proved difficult to build over a seven-year period because of insurgent activity. The plant ultimately will serve approximately 100,000 residents of the city of Fallujah, which did not have a sewer system before this project was built.