By Gary Sandiford on 25th July 2012 in Weekly Security Update

Olive Group Iraq statistics are drawn from multiple sources, including media reporting and direct liaison with in country assets. Included within the statistics are a minority sub-set of serious incidents which may not be purely attributable to insurgent/terrorist groups, such as murder, kidnappings and organised crime activities.

The total reported incidents in Iraq for the week 16 July to 22 July was 105. This is slightly above last week’s figure of 101, however the current weekly average for 2012 remains at 104 incidents. For most of the week reporting was dominated by ISF activity with relatively few attacks being successfully prosecuted. ISF also published information on security plans for Ramadan which typically involved increased security for sensitive locations and at static and mobile checkpoints, as well as more assertive offensive operations in traditional insurgent strongholds such as northern Babil and south of Kirkuk. However, the week ended with a series of attacks across central and northern Iraq which appear to have been the opening gambit to a series of nationwide attacks on 23 July*. 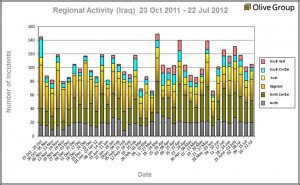