By Gary Sandiford on 19th September 2012 in Weekly Security Update

The total number of reported incidents across Iraq for the period 10-16 September 2012 was 155, bringing the 2012 weekly average to 113 incidents.  This elevated figure would appear to indicate that the basic security level in Iraqis not normalising following the Ramadan campaign, but rather violence is being sustained at above average levels.  While the Northern Region returned to levels of violence seen over the course of 2012, the Baghdad and Western regions continue to display high incident levels; and, in a break from recent trends, so does Babil.  In the North Central Region the security picture was mixed, with particular hot-spots in Kirkuk and Shirqat in the north of Salah ad-Din, whilst violence levels were reduced elsewhere.  The South East Region remained largely subdued.  A number of demonstrations occurred this week in Maysan, Dhi Qar, Baghdad, Basra, Hilla, Karbala, Samarra, Mosul, Kut and Diwaniya against the so called ‘anti-Islam film’ The Innocence of Muslims, in parallel with demonstrations that have occurred elsewhere in the Muslim world. 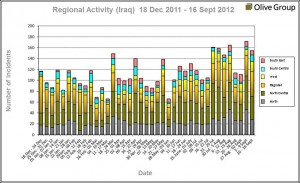