By Gary Sandiford on 10th October 2012 in Weekly Security Update

The total number of reported incidents in Iraq For the period 1 – 7 October 2012 was 116.  This is a significant decrease from last week’s figure of 186, and equal to the 2012 weekly average.  This return to “normal” levels of violence reflects reductions in reporting across the country.  It is not possible to determine if this marks an end to the summer campaign or merely represents a temporary lull as insurgent groups replenish.  As per usual, the security picture across Iraq was highly regionalised this week.  Most of the southern half of the country was subdued, with almost all incidents appearing to be of a criminal or communal nature.  Activity this week was largely concentrated in Baghdad, the eastern periphery of Anbar and the Tigris River Valley in southern Salah al-Din and Mosul.  However, with the exception of the lower Tigris River Valley, figures in these areas were also down relative to recent weeks.  Once again, targeted attacks on Iraqi Security Forces (ISF) and other government employees were widespread, with high value individuals targeted in Baghdad, Ninawa, Kirkuk and north Wasit.  An Al-Qaeda in Iraq (AQI) statement issued this week again confirmed the priority accorded to the assassination of government personnel. 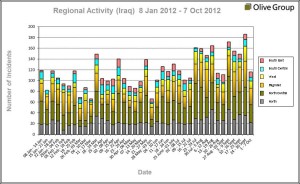