By Gary Sandiford on 5th December 2012 in Weekly Security Update

The total number of reported incidents in Iraq for the period 26 November – 2 December 2012 was 131.  This is above the 2012 weekly average of 118 and an increase on last week’s total of 119.  This week was dominated by a two-wave coordinated attack-series on 27 & 29 November, with all regions except the South East Region being targeted.  This week also saw the reported capture of the Al-Qaeda in Iraq (AQI) Emir, Abu Bakr al-Baghdadi on 2 December; a significant arrest that will in the short term at least have an impact on AQI’s strategic direction.  The two-wave coordinated nationwide attack series on 27 & 29 November 2012, involved at least 20 reported vehicle-bomb (VBIED) and suicide initiated vehicle-bomb (SVBIED) attacks, of which seventeen detonated. There were also numerous improvised explosive device (IED) attacks and shooting incidents over the period, a number of which may have been linked to the attack series.  The first wave of attacks on 27 November were predominantly focused on the northern and central provinces, with the second wave of attacks on 29 November focused on the central and southern provinces. It was reported that the attacks killed 80 people and wounded over 200.  The attacks came just days after the Shia religious observance of Ashura. 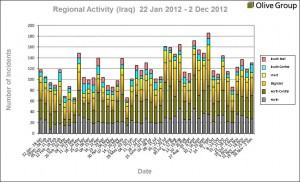