By Gary Sandiford on 9th January 2013 in Weekly Security Update

The total number of reported incidents in Iraq for the period 31 December 2012 to 6 January 2013 was 205.  This is a significant increase from last week’s figure and is well above the current weekly average and continues the pattern of exceptionally busy reporting in Iraq seen since the week beginning 17 December. The increase this week was driven primarily by the North Central Region, with North and West Regions also recording above average activity levels.  By contrast Baghdad and the South East and South West Regions were on par or below their weekly averages, which reflects relatively quiet conditions on the ground in all areas save north Babil and Karbala, which witnessed some attacks on pilgrims at the end of the Arba’een pilgrimage.  The last seven days have also seen further demonstrations stemming from the arrest of a number of (Finance Minister) Rafi Issawi’s bodyguards in late December 2012. 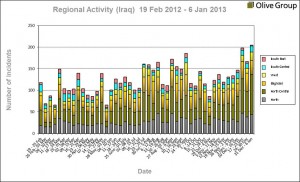