By Editor on 13th February 2013 in Weekly Security Update

08 and 11 February saw bombings in Mosul, Baghdad, Karbala and Shomali that resulted in the deaths of at least 38 people with a further approx 100 wounded, which followed a similar pattern of attacks from the previous week. There has been no great change to the usual mode of attack with the combination of IED (in its various forms) and SAF predominating, however suspected Sunni insurgent elements in Al – Anbar have resumed their use of targeted indirect fire against ISF facilities.

This week events in Iraq were dominated by the continuing sectarian grievances manifested in demonstrations, random spectacular violent attacks and inflammatory political discourse at both the national and international levels. As with previous weeks the overwhelming majority of violence is focused in key flashpoint areas such as the areas around Mosul, the Tigris River Valley, the disputed Kurdish region and Baghdad. There has been no significant increase in violent activity across the country for the past weeks however the national trend does not necessarily reflect what has been happening at a regional and provincial level.

The governments attempt to reach out to regional leaders to resolve the political impasse in Sunni dominated areas appears to have borne some fruit with the majority of protests now having turned relatively peaceful. Despite this the key issues remain a potent trigger for unrest that has also mobilised some key opposition Shiite politicians and religious figures to voice their concerns about Baghdad’s actions and policies towards the protest movement and what this implies for Iraqis as a whole. 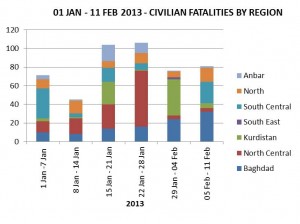 across the sectarian divide to be legitimate grievances. This was reinforced by the actions of numerous local leaders in Al – Anbar who this week arrested and handed over a number of militant insurgents to the ISF. Despite these positive developments it is clear that any attempt to resolve the deadlock will be complex and the potential for failure could lead possible further protest and violence through February.