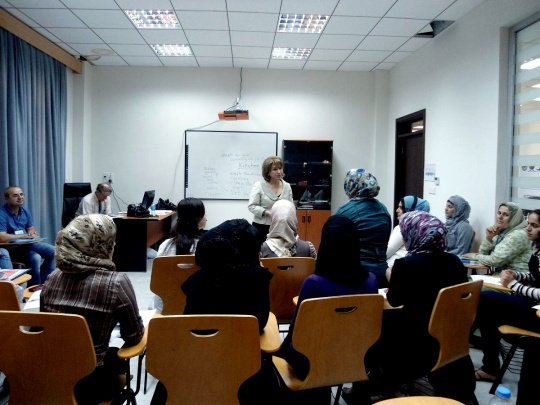 The report said, “The impediments standing in the way of women’s work stem from social discriminatory notions and radical religious motives, in addition to tribal norms.”

Ithar Issam, a materials engineer who works in a governmental company in Kut, south of Baghdad, told Al-Monitor, “The management of projects and fieldwork is usually not assigned to female engineers, even if there is an available vacancy. Usually, female engineers are only hired in administrative office positions.”

Issam said, “This phenomenon is caused by the stereotype that women cannot cross long distances and deal with workers and contractors. Security, maintenance and transport jobs that require effort or nightly shifts are still strictly reserved for men.”

However, Ibrahim’s resolve to change this image pushed her to participate in fieldwork in a project to build a bridge in her hometown, Kut.

According to the UNDP report, sexual harassment in the workplace is very worrying in Iraq. In the city of Sulaimaniyah in the Iraqi Kurdistan Region, 73.7% of women who were surveyed as part of the UNDP report noted that they have been sexually harassed, but only 12.3% of them remembered the details of the incident.

There are no regulations on sexual harassment in the workplace in the chapter on protection of women in the applicable 1987 Unified Iraqi Labor Law no. 71.

Maysoun al-Dimolji, a member of the Iraqiya List in parliament, said in a statement to BBC Arabic, “Some lawmakers verbally harass female MPs in order to force them to leave parliament.”

Cyran Hadi, a recruitment consultant in the city of Erbil in the Kurdistan region of Iraq, speaking to Al-Monitor via telephone, said, “Women have equal and even more opportunities than men. Yet, the society’s perception of women may sometimes limit their options, as some parents prefer their girls working in the government rather than the private sector. Moreover, some private companies prefer hiring men instead of women as they do not demand maternity leave or have child-care obligations.”