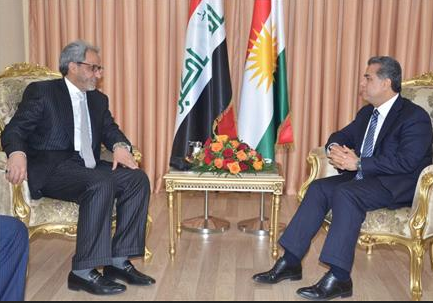 By Editor on 9th December 2013 in Iraq Industry & Trade News

The Kuwaiti Ambassador to Iraq, Mr Ghassan Al-Zawai, met with the Head of the KRG Department of Foreign Relations, Minister Falah Mustafa yesterday to discuss ways of further developing ties with Kurdistan particularly as Kuwait plans to open its Consulate General in Erbil soon.

After Kuwait’s decision to open its Consulate General in Kurdistan, Ambassador Al-Zawai made his first visit to Kurdistan to discuss a number of issues including the opening of their new Consulate. Minister Mustafa congratulated Ambassador Al-Zawai on his appointment as the new Kuwaiti Ambassador to Iraq and assured him of the KRG’s full support for the mission.

Minister Mustafa said, ‘The opening of this new Consulate General will help pave the way for cooperation between Kurdistan and Kuwait.’ They discussed the different areas in which this cooperation can occur and Minister Mustafa expressed his hope that Kuwait would start direct flights to Kurdistan to help facilitate this process.

Ambassador Zawawi thanked Minister Mutafa and the DFR for their assistance during this visit and said, ‘The prosperity of Kurdistan and how it has developed is a model for the rest of Iraq.’

During the meeting they discussed the latest security and political developments in Kurdistan, Iraq and the wider region.

One Response to Kuwait to Open Consulate in Kurdistan