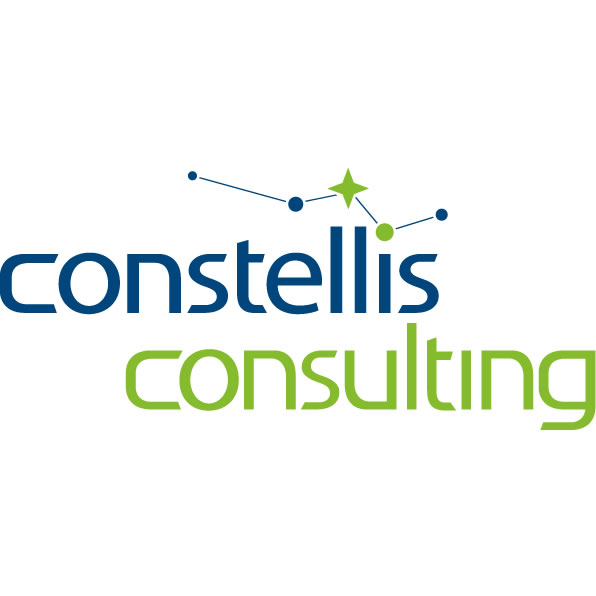 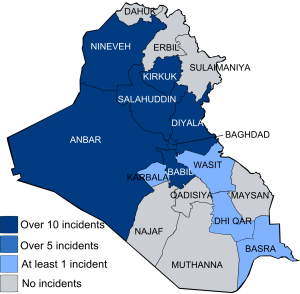 The proximity of the general parliamentary elections was reflected in changing security dynamics and political movements across several leading parties. Though campaigning is only set to open on 01 April, legal disputes and vindictive declarations highlighted major divisions between the ruling coalition, Shia factions and Sunni opposition groups. Despite his recent withdrawal from politics, Muqtada al-Sadr called on his electorate to mobilise against corrupt and incompetent politicians, in a veiled reference to Prime Minister Nouri al-Maliki. The latter sparked a controversy when judges seen as loyal to his party barred some of his most prominent critics from running in the elections. Meanwhile, Kurdish and Sunni MPs continued to challenge the government over the passing of the budget bill, in a clear attempt by Nujaifi’s Sunni coalition to court the powerful Kurdish bloc.

Although Maliki faces a competitive election in light of the country’s escalating violence and the fracture of his traditional power base, the lack of a credible opposition and an improved security situation in the south have increased his chances of winning a third term. Amid continued violence in Iraq’s restive central and northern governorates, VBIED incidents witnessed in several provinces south of Baghdad could indicate a change of tactics in the lead-up to the elections. In an unusual series of incidents, car bombs detonated in Babil, Wasit and Karbala. Although south-eastern governorates remained insulated from major attacks, the focus of ISIL militants on these locations may signify a willingness to strike Shia-dominated areas ahead of the votes. The insurgency could indeed be displaced further south in a bid to influence the voting, as the core of Maliki’s electorate is established in this region. Given the imminence of the votes and continued political stagnation, incident levels are likely to escalate in the lead-up to the elections.

Levels of violence recorded in northern provinces remained consistent with previous weekly averages, with most incidents concentrated in Nineveh and Salahuddin. Increased militant activity in Diyala and Kirkuk governorates was reflected in several VBIED incidents, as most car bombs were distributed across the north. On 20 March, a VBIED detonated near a cemetery in Tuz, Salahuddin, injuring 14 civilians. On 24 March, two car bombs killed three people and injured three others in Mosul, Nineveh. In Kirkuk, two VBIEDs detonated in the town of Dibis, killing three civilians and injuring 34 others. A series of complex attacks also hit Diyala governorate, where four car bombs were recorded over the reporting period. On 21 March, an attack on a police headquarters killed at least 20 ISF recruits. While northern governorates are expected to witness similar levels of violence over the next weeks, insurgents could shift their focus to central regions as elections loom and political campaigns are due to start next week. Meanwhile, Kurdish provinces remained free from major incidents despite growing tensions with Baghdad and a high turnout for the celebrations of Nowruz on 20 March. 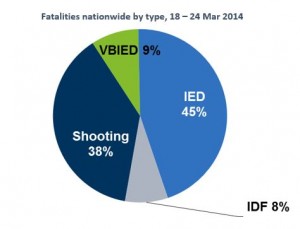 Continued shelling on urban areas in Anbar governorate increased the death toll amongst the civilian population. The controversial approach of the Maliki administration to the Anbar crisis has facilitated the establishment of shadow institutions within Fallujah, with militants reportedly providing social services and policing the streets. The nature of the conflict, which features a complex nexus of tribal fighters with shifting allegiances, and the lack of political response to the unrest, have precipitated a stalemate which is unlikely to break in the short term. On 21 March, a suicide bomber detonated on a funeral procession for an Iraqi officer in the Wari area of Ramadi, killing one policeman and four civilians, and injuring 22 others.

Despite a substantial amount of ISIL resources allocated to northern governorates and provinces surrounding the capital, Baghdad continued to attract most deadly incidents. The number of VBIED attacks remained well below average, with only two car bombs recorded on 18 March. According to current patterns of violence, series of mass-casualty attacks are expected to return to the capital in the next two weeks. As campaigning opens on 01 April, political gatherings could be targeted and draw militants back to the capital.

Although south-eastern provinces were preserved from major attacks, levels of violence sharply increased in the governorates neighbouring Baghdad. While Babil remained the most volatile, Wasit and Karbala provinces witnessed unusual VBIED incidents. On 18 March, a car bomb detonated inside a parking lot in Karbala, injuring two civilians. In Babil, two car bombs killed at least three civilians and injured eight others. In Wasit, two VBIEDs detonated in sequence and caused scores of casualties. While violence was confined to areas surrounding restive central provinces, southern governorates had not witnessed such militant incursions since December 2013, as the unrest in Anbar effectively shifted the focus of insurgents towards northern provinces. With elections looming, these incidents could precede further militant operations in the south to influence the voting, as the core of Maliki’s electorate reside in southern provinces. The power struggle opposing various Shia factions could also be reflected in the nature of incidents witnessed in the south, with local figures likely to be targeted in the weeks preceding the elections. 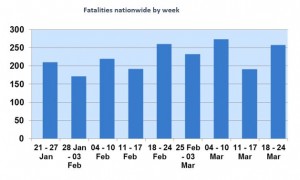