The following article was published by Reidar Visser, an historian of Iraq educated at the University of Oxford. It is reproduced here with the author’s permission. Any opinions expressed are those of the author, and do not necessarily reflect the views of Iraq Business News.

The uncertified result of Iraq’s parliamentary elections, released by the election commission today, cannot be described as anything other than a victory for the incumbent prime minister, Nuri al-Maliki.

Compared with 2010, Maliki increased his share of seats in the Iraqi parliament from 89 to 94. This quite despite the fact that Maliki experienced numerous defections from his list before the elections and therefore fielded a much  slimmer electoral coalition than in 2010. His success can hardly be translated as anything other than an indication of his continued popularity among voters despite growing unease about his rule among political opponents. 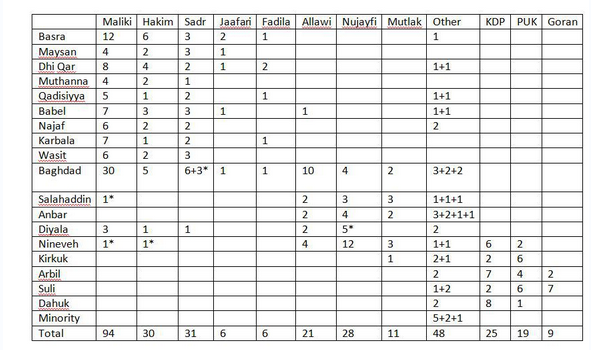 Not only did Maliki manage to increase the size of his parliamentary contingent. His political enemies also look far more fragmented than before. In the Shiite camp, the Sadrist saw their bloc reduced by about a quarter of its previous size, whereas ISCI, despite making something of a comeback, was unable to garner more than 30 seats.