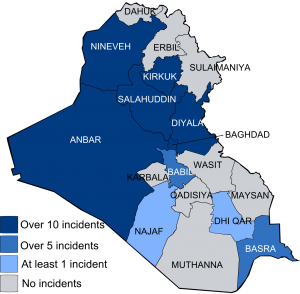 Casualty figures released in June indicated that nearly 800 people were killed in violence across Iraq in May, making it the deadliest month so far this year. This uptick in violence moved in parallel with an increase of tensions in the political sphere, as divisive and opaque parliamentary negotiations confirm that a next government is unlikely to materialise in the short term. Amid rumours that PM Maliki’s State of Law coalition has concluded an initial agreement with the Patriotic Union of Kurdistan (PUK), the increased appetite for militants to strike Shia interests has been reflected in a return of mass-casualty incursions in the south-eastern governorates. Despite these unconfirmed claims, other parties which include the Kurdistan Democratic Party (KDP), the Sadrist bloc and the Islamic Supreme Council of Iraq (ISCI) have voiced their opposition to a government orientated around Nouri al-Maliki. On May 27, Kurdish President Massoud Barzani threatened to organise a referendum on independence in the event that Maliki wins a third term. Protracted coalition-building will continue to impact on the government capacities to contain the insurgency, as resources remain absorbed by the political process. With unchanged circumstances in Anbar, continued militant appetite to strike ISF targets and a government formation process which widens divisions both along sectarian lines and within Shia tribal factions, levels of violence are expected to continue increasing over the next months.

Levels of violence across northern governorates remained elevated, amid a substantial increase in the number of incidents recorded in Nineveh, where seven car bombs caused dozens of casualties in Mosul district. In the most significant attack, two VBIEDs detonated in two areas of Mosul, killing two policemen and injuring 12 civilians. The governorates of Salahuddin, Kirkuk and Diyala displayed incident levels consistent with previous weekly averages, both in their intensity and frequency. Nineveh was the only northern province witnessing VBIED incidents, as militants temporarily shifted their efforts towards central and southern targets. While Kurdistan remained free from major incidents, the relatively large share of seats earned by Kurdish lists in the elections has allowed Erbil to translate their leverage against Baghdad into bold policies. Following the first independent oil sale to Turkey, and despite threats of legal actions from central authorities, Massoud Barzani reaffirmed the constitutional rights of Kurdistan to manage their own trade agreements. The presence of ISIS strongholds around Baghdad guarantee that militant resources will remain concentrated in northern governorates over the next weeks. 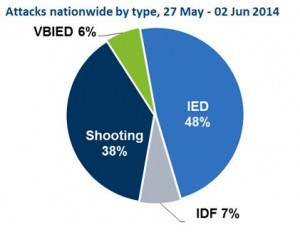 Violence in central provinces remained defined by security dynamics aligned with previous weekly reports. Baghdad continued to attract the majority of complex attacks, with five car bombs recorded in several districts of the capital. The most significant of these incidents occurred in Ameen district, as a VBIED killed five civilians and injured 20 others. On May 27, a militant wearing a suicide vest detonated himself in the Al-Shorja market area of central Baghdad, killing 13 civilians and injuring 25 others. Another suicide attack displaying similar tactics caused 17 fatalities and wounded an additional 30 people. As the situation in Anbar stagnates, the crisis has become a means for political leaders to raise their personal profile and gain legitimacy. On June 02, ISCI leader Ammar al-Hakim and Sheikh Ahmed Abu Risha, a prominent Sunni tribal leader in Anbar, met in Baghdad to discuss the political process and the insurgency in the country’s western desert. While discourses alone are unlikely to affect the situation in Anbar, the crisis is regularly manipulated by political parties to justify their opposition to Nouri al-Maliki, who currently seems in an advantageous position to remain Prime Minister. Security dynamics will continue to reflect political stagnation in Baghdad and levels of violence are therefore expected to be maintained across central governorates.

In contrast with previous weekly reports, southern provinces were marked by a return of expeditionary VBIED attacks. A car bomb detonated in Dhi Qar on June 02, as the first incident of this type in south-eastern provinces since April 20. The attack was coordinated with a second car bomb explosion in Najaf, which caused dozens of casualties. Despite this change in security dynamics, the pattern of regular mass-casualty attacks remains disrupted and has been replaced with limited and sporadic incursions into Shia-dominated governorates, where the violence remains largely concentrated in Babil and Basra provinces. On June 02, a VBIED detonated in the Asriyah Village north of Babil, killing two civilians and injuring four others. Other reported incidents continued to consist of IEDs against ISF targets, while heightened tribal tensions were responsible for a substantial increase in violence levels in Basra, with skirmishes and targeted shootings causing casualties. Considering the widening tensions between the various Shia coalitions as the political process fails to form a legitimate government, levels of violence are set to continue increasing over the following weeks. 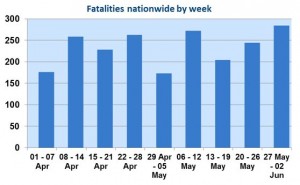