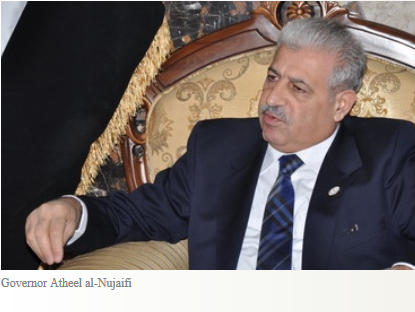 By Editor on 8th July 2014 in Politics, Security

Interview With Ninawa’s Governor: “Getting Rid of the Extremists in Mosul Should be Easy"

Prominent Sunni Muslim politician, Atheel [Athil] al-Nujaifi, who is also the governor of Ninawa province in-exile, talks about why he fled the city when Sunni Muslim extremists attacked. He also explains why the solution for the current Iraqi crisis must come from within the Sunni Muslim population, and why having the Iraqi PM resign won’t solve all the country’s problems.

The governor-in-exile of Ninawa province, the northern region first brought under the control of Sunni Muslim extremists over three weeks ago, talks about why he left the city while it was under attack and how Baghdad refused to let Iraqi Kurdish military come to the city’s aid.

As a prominent Sunni Muslim politician, governor Atheel al-Nujaifi also presents his solutions to the current problem. He believes Iraq’s Sunni know that the Sunni Muslim extremists of the Islamic State, or IS, group are dangerous but that, given the current state of heightened sectarian tensions, they are seeing the group as their protectors, rather than their enemies. If this opinion could be changed, he says, then it should be easy to get rid of the militants from Mosul and other parts of the province.

NIQASH: Can you tell us how the provincial government you once headed in Ninawa is currently operating?

Atheel al-Nujaifi: There are still 14 administrative units which belong to the province of Ninawa and which are not controlled by the IS group. And the provincial government is now based in one of these areas, Qosh. We are holding our council meetings there. And with regard to the provincial council’s service-related departments, we have asked that services - such as water, electricity and health services - continue to be provided. We have opened new offices for these departments outside of Mosul.

Because the IS group doesn’t seem to have a vision for, or system for, managing facilities like this, and given that it cannot pay the salaries of state employees, many of the employees are still communicating with us.

2 Responses to Ninawa Governor: “Getting Rid of Extremists is Easy"