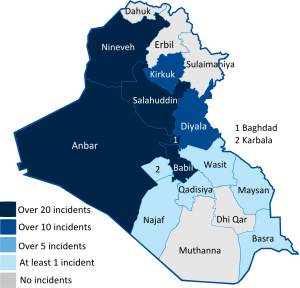 Amid worsening levels of violence owing to the increase in direct clashes between the ISF and ISIS militias, Iraq witnessed movements in the political sphere with the election of a new President. Fouad Massoum, a Kurd member of the Patriotic Union of Kurdistan (PUK) put forward by the Kurdish alliance, was appointed by Iraqi MPs on 25 July. This appointment follows a tradition respected since 2003 to elect a Sunni Speaker of Parliament, a Kurdish President and a Shia Prime Minister. The election of a Prime Minister, necessary to forming the next government, is expected to be the most problematic, as Sunni and Kurdish lists, but more importantly Shia parties outside the State of Law coalition, are staunchly opposed to the re-election of Nouri al-Maliki. The Prime Minister, relying on the majority his party garnered in the April polls, has shown no intention of giving up his seat despite increasing pressure from international players and domestic figures.

Maliki continued attempts at easing tensions with Iraq’s Kurdish lists, despite rising tensions with Erbil on energy disputes. On 26 July, Maliki visited former President Jalal Talabani in Sulaimaniyah, though no information filtered from the meeting. All these indicators point toward continued gridlock in the parliamentary negotiations aimed at forming a new government, and political stagnation will continue to hinder efforts at dislodging ISIS from Sunni-majority areas. Despite tighter security measures to protect the festival of Eid al Fitr marking the end of Ramadan, violence continued to claim the lives of dozens of civilians on Monday alone, and an estimated 390 were killed over the reporting period. Main hot spots for violent incidents continue to be located in urban areas of Nineveh and Salahuddin, southern Kirkuk, eastern Anbar, western Diyala and northern Babil. Unchanged security patterns ensure that fighting zones will remain predominantly located in these areas.

The nature and frequency of attacks reported in northern governorates remained aligned with previous patterns, with ISF and ISIS both failing to make major territorial gains, despite an increased number of direct clashes between government forces and Sunni militants. The main frontline in Salahuddin appears to have moved back towards Samarra, following unsuccessful ISF attempts at retaking Tikrit. On 29 July, ISIS gunmen reportedly blew up the main bridge between Tikrit and Samarra, considerably hindering further counter-insurgency efforts. These tactics, previously used by insurgents in Anbar, confirm the strategy of ISIS in the North, consisting of cutting off routes to isolate their territories from ISF reach. While Peshmerga forces have consolidated their presence in all disputed areas, direct fighting with ISIS militias on their outer borders remained concentrated in the mixed town of Jalawla in Diyala, with the restive neighbourhoods of Tajnid and Wihda changing hands over the reporting period. These areas currently remain under ISIS control. Intensifying clashes in Nineveh and Diyala led to an increase in casualties within Kurdish ranks, with over 60 casualties reported between 24 and 28 July only. The ISF continued to rely on airstrikes to hit militant positions in the ISIS-controlled cities of Mosul and Tikrit, causing an undisclosed number of casualties within the civilian population. Security dynamics are expected to remain stagnant over the coming weeks, with a significant militant push towards Baghdad unlikely at this stage. 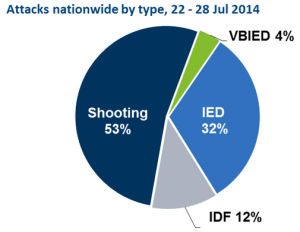 Most serious reported incidents continued to be concentrated in northern and western Baghdad province, as well as urban areas of eastern Anbar. On 24 July, at least 60 people died in clashes after suicide bombers and fighters attacked a bus transferring prisoners in Taji, northern Baghdad. While the responsibility of the attack remains unclear, the involvement of Shia militias cannot be ruled out as armed groups independent to the ISF have progressively been filling the security vacuum left by government forces in Baghdad and its surroundings. On 28 July, also in Taji, four soldiers were killed and seven others wounded when mortar shells fell on an army checkpoint. Meanwhile, violence within the capital continued to hit predominantly Shia neighbourhoods. On 24 July, two car bombs exploded in Karadah area, south east Baghdad, killing a policeman and 11 civilians, and injuring 78 civilians. While the pattern of VBIED waves in the capital remains largely disrupted with only three car bombs reported, last week’s VBIED sequences demonstrate the ongoing ISIS commitment to strike the capital with mass-casualty assaults. The most significant incidents reported in Anbar continued to consist of militant attacks on local police stations, and ISF airstrikes on insurgent-held neighbourhoods of Ramadi and Fallujah.

Southern provinces continued to follow established patterns of violence, with significant incidents heavily concentrated in Babil as a means to draw the ISF away from their northern positions. While reporting remains disrupted in most of the North, it can be assessed that this strategy has succeeded to an extent, in light of the strengthening of ISIS positions in areas beyond Samarra. Meanwhile, despite isolated incidents, significant intra-Shia rivalries have yet to materialise, though the unrest has undoubtedly impacted on Shia-nationalist sentiments. On 23 July, in the town of Abu al-Khasib, south of Basra, gunmen broke into a Sunni mosque during prayers, killing the preacher and kidnapping four men. This type of sectarian attack could increase across the South as the crisis deepens in northern provinces. 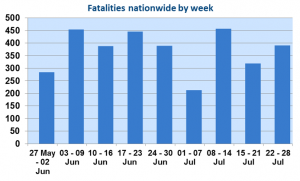