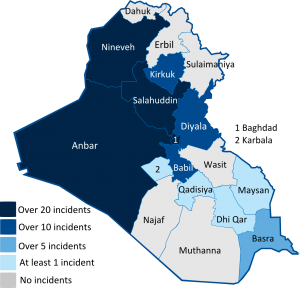 On 14 August, Nouri al-Maliki bowed to increasing domestic and international pressure, and agreed to step down as Prime Minister to endorse Haider al-Abadi in a televised speech. This endorsement paves the way for the formation of a new government, after months of parliamentary deadlock and Maliki’s stubborn insistence to run for a third term, resisting the opposition of nearly all Iraqi blocs and dwindling support of the Iranian leadership. This relatively smooth transition has largely been prompted by the lighting advance of IS militants into Iraq’s northern governorates, making the formation of a central government increasingly necessary to bring meaningful political solutions to the worsening security situation. Abadi’s biggest challenge will undoubtedly be to reach out to the Sunni community by opening dialogue with their tribal leaders and addressing their legitimate grievances. These actions will depend on Abadi’s ability to craft a leadership style contrasting with Maliki’s. Regardless of Abadi’s apparent intent to build bridges between Iraq’s various communities, hard-line elements within the Dawa party, of which Abadi and Maliki are both members, are likely to try and maintain their influence on decision-making, which will ultimately impact on Baghdad’s response to the insurgency. The majority of violent clashes with IS fighters continued to occur in outlying areas of ‘disputed’ areas, with Kurdish counter-offensives supported by airstrikes translating into several territorial gains in Nineveh. As foreign military powers step up their involvement in Iraq by sending in airplanes and equipment to arm the Kurds, counter-insurgency efforts are expected to remain focussed on areas of Nineveh where minorities are threatened by the actions of IS militants. These mass executions largely accounted for the significant rise in casualties reported this week, with 437 fatalities nationwide.

On 18 August and after days of fighting aided by US airstrikes, Kurdish and Iraqi forces recaptured the Mosul Dam on the Tigris River, which fell to militants less than two weeks ago. Peshmerga forces reportedly recaptured the Christian towns of Tel Skuf, Sharafiya and Batnaya on their march towards the dam, and now control most of the surrounding area. While sustained airstrikes over the past days have proven effective in hindering IS’s advance, they have also prompted a tactical shift which will make it harder to dislodge insurgents from urban areas. In response to airstrikes, previously grouped IS pockets of militants have started to dissipate and blend in with civilian populations, making targeting more difficult. On 15 August, the Islamic State reportedly executed 80 members of the Yazidi community in the village of Kocho and kidnapped dozens of women before regrouping in Tal Afar. The siege of Mount Sinjar was reportedly broken by the US airstrikes conducted on the area, where thousands of Yazidis had been stranded for days. Meanwhile, militant activity was reported in Qara Tappa, just 70 miles north of Baghdad, where IS fighters appear to have regrouped to broaden their front against Kurdish forces heavily concentrated in Nineveh. The next days could therefore witness clashes closer to the capital in an effort to shift some of the ISF’s focus away from the North, while Iraqi troops launch operations to retake Tikrit from the south. On 12 August, a suicide bomber attacked a checkpoint near Abadi’s home in Baghdad without causing casualties. On 13 August, a series of five VBIEDs hit the Jadeidah, Sharqi, Bayaa, Aamel and New Baghdad neighbourhoods, killing at least 16 civilians and injuring hundreds. On 17 August, a bridge connecting the Fallujah corridor with the south-west of Baghdad, and used by the ISF to transport supplies, was blown up by IS insurgents. An early effect of Maliki’s resignation was felt just one day after the controversial Shia leader stepped aside. On 15 August, members of several Sunni tribes reportedly agreed to ramp up their joint effort with the ISF to fight insurgents in the north-eastern part of Anbar. This tribal surge also followed Anbar governor Ahmed al-Dulaimi’s statement that he had secured US support. Unconfirmed reports stated that US fighter jets conducted flights over the Haditha Dam to prevent IS from capturing the dam. US involvement in Anbar is a sensitive matter as the region has historically been anti-American. Tribal clashes and ISF airstrikes reported in Anbar remained predominantly concentrated in the corridor stretching from Haditha to Fallujah, with accounts of IS attacks in Hit.

Political tensions in the South-East over the nomination for the next Prime Minister have decreased, following a public declaration by Nouri al-Maliki endorsing the nomination of Haider al-Abadi. Levels of militant activity across the South remained stagnant, confirming IS’s priority to target northern provinces. The bulk of this violence continued to occur in Babil’s northern Jarf al-Sakhar district, though the decrease in reported incidents backed the assessment that IS militants have alleviated their pressure on Baghdad’s southern belt. Basra governorate continued to follow established patterns of violence, with tribal and criminal disputes accounting for the majority of incidents in the area. The process of government formation will continue to drive most of the Shia infighting witnessed in the South-East. 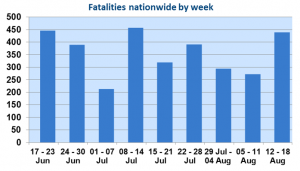