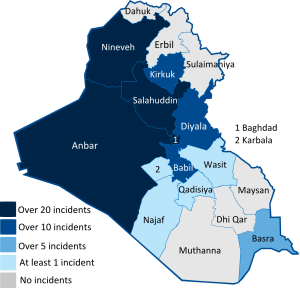 The formation of the new Iraqi government last week led to the swift mobilisation of several Western powers pledging support to the Kurds and Iraqi forces. On 15 September, leaders from thirty countries promised to help fight the Islamic State militants in the north of Iraq, following an international meeting held in Paris and attended by Iraqi President Fouad Massoum. Despite the formation of an international coalition, the main challenges to Iraq’s stability will remain political, and essentially depend on Haider al-Abadi’s ability to persuade the Sunni minority to rebel against IS. The inclusion of Sunni constituencies in the political process will be crucial in turning ambivalent populations into entities with a stake in the new status quo. Even if decisions moving towards this end were implemented, notably with the appointment of Sunni politicians to high-ranked security functions, convincing local tribes that their best interests lie in an alliance with Iraq’s Shia-dominated government will have to overcome a historic and mutual mistrust, and will struggle to hold in the longer term. This task will be all the more complicated by the appointment of former, controversial PM Nouri al-Maliki as one of the country’s three vice presidents, which was certainly set as a condition to Abadi’s endorsement. Most of the violence remained focused on the central and northern governorates, with IS-controlled territories assessed to be mainly located in and around the corridors between al-Qaim and Fallujah in Anbar, Sinjar and Mosul in Nineveh, Mosul and Samarra in Salahuddin, as well as areas of southern Kirkuk and northern Diyala. Despite the return of low-impact car bomb attacks in the South, the region north of Baghdad will continue to see the majority of IS-related incidents. The involvement of foreign powers in the conflict ensures a sustained strategic focus on northern Nineveh and key districts around Baghdad, with more than 150 airstrikes conducted so far.

While reporting remains disrupted in most of the North, militant activity was recorded in several areas of Nineveh and Salahuddin. On 14 September, Islamic State insurgents publicly executed eight Sunni men in the village of al-Jumasah, north of Tikrit, for allegedly plotting against the group. This violence is certainly aimed at intimidating local Sunni populations and preventing a revolt in IS-controlled territories, as the central government makes attempts at reaching out to disenfranchised tribes. Unverified reports of mass graves uncovered in several villages seemed to back the strategy of coercion followed by IS. On 12 September, three leaders of the Ubaid tribe were executed near Hawija in Kirkuk, while dozens of former ISF elements were kidnapped by insurgents. The main areas of direct fighting between government forces and insurgents continued to be located south of Tikrit, with clashes reported in al-Dur. Despite the involvement of Western air support in the coordinated campaign against IS, government forces lack the capacity to retake large urban areas and any further capture of territories currently controlled by the Islamic State are likely to be limited to small towns or rural areas. All fronts have remained stagnant over the reporting period, with ISF and Peshmerga forces maintaining their existing presence and IS adapting to airstrikes by limiting their exposure.

The number of car bomb attacks in Baghdad remained aligned with pre-established patterns, with four VBIEDs reported across southern neighbourhoods of the capital. On 10 September, two vehicles exploded in Maysalun and Ghadir areas, killing at least nine civilians and injuring 50 others. On the same day, a suicide attack near the New Baghdad Bridge killed two ISF elements and 19 civilians, and injured 53 others. On 12 September, another VBIED detonated in eastern Baghdad, killing at least four people and wounding 13 others. US airstrikes continued to be reported near the Haditha Dam, in an effort to protect the strategic infrastructure from IS insurgents and strengthen the positions of ISF and co-opted Sunni tribes operating in the area. The majority of resources allocated to fight IS in Anbar appear to be directed at areas around the dam. On 13 September, a joint unit of ISF and local tribes supported by airborne forces launched an operation to re-take Albu Hayat near Haditha. The same dynamics will apply over the next reporting period, with any territorial advance unlikely from either side.

Southern governorates witnessed an increase in violence over the reporting period, owing to the continued reliance of the ISF on Shia militias and a subsequently freer operational environment in the South. On 11 September, three car bombs detonated across the south-eastern governorates of Karbala, Najaf and Qadisiya, causing dozens of injuries within the civilian population. Car bombs in the South-East had been avoided since a twin blast hit Karbala on 25 August. The pattern of mass-casualty incursions is effectively disrupted and VBIED attacks are expected to remain irregular and relatively low-impact. Low-level small fire attacks and IEDs continued to account for the majority of incidents reported in the South, though an increase in kidnapping incidents and criminal-related activities was observed in Basra, a probable consequence of a more permissive security environment. Despite these relative changes, the number of fatalities recorded in the South remained higher in Babil and the restive governorate is expected to continue absorbing most of the violence. 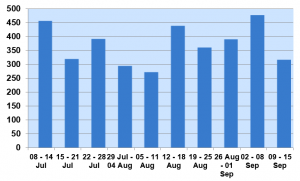