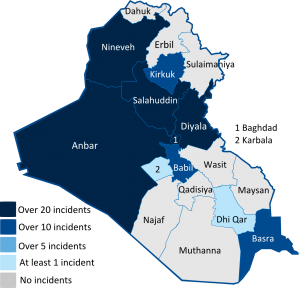 On 16 September, Iraq’s parliament rejected two appointees to head the critical defence and interior ministries, two of the most sensitive positions which remain to be filled. The opposition of the Shia Alliance prevented the parliament from reaching a majority vote, which would have been necessary to approve the appointments of Riad al-Ghareeb and Jaber al-Jaberi. As Prime Minister Haider al-Abadi attempts to fulfil his promise to grant concessions to the Sunnis, completing the formation of an inclusive government will have to overcome long-lasting divisions between the different sectarian and ethnic groups, as well as within the Shia community itself. While negotiations continue in order to fill the five remaining positions in the new Iraqi cabinet, the United States broadened their operational areas, and are now operating over Erbil, Sinjar, the Mosul and Haditha dams, as well as restive territories in northern Babil. Despite the international efforts currently deployed in several parts of the country, Abadi formally ruled out an intervention of foreign ground troops, in a probable attempt at asserting himself as a leader immune to foreign influence. Though Abadi’s position was recently reinforced by the formation of a new government and a leadership style contrasting with Maliki’s, tangible measures towards reconciling Iraq’s antagonistic groups have yet to be discussed and are unlikely before the cabinet is complete. Security dynamics evolved this week, with militants adopting an increasingly defensive posture in the North, as most government resources continue to be allocated on this frontline. As a result central provinces witnessed an increase in militant activity, while levels of violence in the South remained aligned with previous patterns.

Kurdish forces launched several offensives to reclaim strategic villages in the plains separating Kurdistan from Mosul, which remains entirely controlled by the Islamic State. Peshmerga units are currently attempting to secure the village of Hassan al-Sham on their way towards Mosul. US airstrikes, without better intelligence on the ground, are likely to be less effective in Iraqi cities and urban centres will be the most challenging to reclaim. As France carried out their first strikes against IS positions in northern Iraq, the United States expanded their air campaign by launching four airstrikes in south-west Kirkuk, destroying a number of vehicles. As Iraqi and Kurdish forces consolidate their positions in Nineveh, further operations were conducted in Diyala’s Himreen, Khalis, Sadia and Muqdadiyah districts, leading to clashes with insurgents. While international support has undoubtedly contributed to stabilising the frontlines and hindering IS’s advance, insurgents have so far maintained their grip on key urban areas. Any important breakthrough remains unlikely in the next weeks, and the security environment should remain stagnant. Most operational areas should remain focused on areas north of Mosul, Sinjar, southern Kirkuk and northern Diyala.

IS militants planned two coordinated attacks in two sections of Baghdad on 18 September, with the aim to free more than a thousand prisoners. The group employed mortar shells, suicide bombers and at least one car bomb in an attempt to infiltrate the Adala Prison in Khadimiya district, and destroy an office of the Badr Organisation in another neighbourhood of the capital. The fact that mortar rounds were fired from areas north of Baghdad demonstrates that IS has the capability to stage complex attacks on the capital without relying on existing cells inside Baghdad. More car bomb attacks were reported in the capital, in the Karada and Mahmudiya neighbourhoods, killing and injuring dozens of civilians. Despite the boldness of these attacks, demonstrating an effort at relieving the pressure put on the northern frontline, the number of VBIEDs remained in line with previous averages. In Anbar, IS militants attacked an army base in the vicinity of Sijir, near Fallujah, which was under siege for a week. Hundreds of soldiers were reportedly captured, killed or injured in the militant offensive, which involved VBIEDs and suicide bombers. The increase in complex operations witnessed in the central provinces demonstrate an apparent willingness to shift the attention of the ISF away from the North, where IS’s advance has been hindered by a combination of military operations and air support. This trend could be prolonged over the next reporting period, as militants appear willing to stretch government resources.

A significant increase in criminal activities in Basra owed to a more permissive operational environment, as ISF units from the South continue to assist operations in the North. Following last week’s car bombs, south-eastern provinces avoided major militant incursions, while Babil continued to witness most of the violence. While sophisticated IS operations such as the ones seen in Anbar and Baghdad are unlikely due to a far less favourable terrain to Sunni insurgents, the latter could turn to southern targets, in an effort to stretch the ISF focus further. Any complex attack staged in the South-East will remain isolated, as insurgents lack the capability to launch sustained assaults away from their strongholds. Additionally, the absence of most ISF units could translate in an increase in tribal clashes in Basra, which have been absent this week. 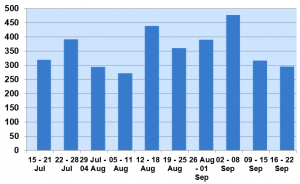