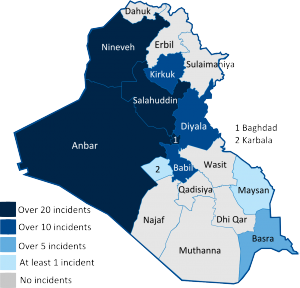 High levels of violence continued to plague Iraq’s security environment, with general dynamics in line with pre-established patterns. Whilst ISF counter-offensives were successful in re-taking some of the lost territories in Anbar and Diyala, the situation remained generally stagnant, with pro-government forces and insurgents each failing to make major gains. The series of airstrikes conducted by a coalition of Western countries in Iraq continued to be coordinated with a joint force of US and Arab warplanes in Syria, where oil facilities controlled by the Islamic State were targeted with the aim to hit the group’s financial resources. As part of an the overhaul of the country’s armed forces, Prime Minister Haider al-Abadi retired two senior generals known for being close allies of former PM Nouri al-Maliki. This decision responds to a dual imperative for Abadi, who needs to distance himself from the legacy of his predecessor, and tackle a security situation which has caused an increasing number of casualties within the ISF. While this measure will hardly impact on the ISF capabilities, it will likely reinforce Abadi’s leadership among the minorities and moderate Shia elements. On 24 September, US President Barack Obama met Abadi for the first time at the UN General Assembly, publicly endorsing the Iraqi leader and promising more arms and equipment. Following last week’s complex attacks in Baghdad and Anbar, US warplanes focused more heavily on areas surrounding the capital, with the aim to deter IS from launching sophisticated and coordinated assaults on Baghdad. The main areas of direct fighting should remain located in northern Diyala, southern Salahuddin, north-eastern Anbar and northern Nineveh.

While the situation remains stagnant in most areas of the North, a joint force of Iraqi troops and Shia militias made some gains in Diyala. On 27 September, Iraqi fighters retook the Sudur dam, near Muqdadiyah. This capture follows days of heavy fighting in the area, which left many dead in pro-government and insurgent ranks. Previously on 25 September, a coalition of ISF and tribal fighters had cleared the Shohani area, north of Muqdadiyah, seizing several villages. Meanwhile, airstrikes hit areas of southern Kirkuk, with local intelligence reporting the deaths of two senior IS leaders near the town of Bashir. Airstrikes have focused on areas entirely controlled by IS and the number of casualties is therefore difficult to assess. Warplanes have sought to avoid urban centres, in order to limit civilian losses, and missiles have therefore mainly hit targets such as armoured vehicles. As militants adapt their tactics to new realities, avoiding visible gatherings and blending with local populations, the impact of airstrikes will be limited to constraining IS’s movements, rather than translate in a swift re-capture of territories. Although reporting remains largely interrupted in Salahuddin and Nineveh, local sources reported that militants blew up the Green Church and the Al Arbain mosque in Tikrit, while several public executions were witnessed in Mosul. Clashes between pro-government forces and IS were reported in the vicinity of the Sinjar district and border towns near Syria, with Rabia retaken by Kurdish forces on 30 September. The next days are expected to see additional counter-offensives against IS-held areas of the North.

As previously assessed, IS militants sustained their efforts on northern Anbar, in a bid to drive away ground troops and air support from the North. Following the assault on an army base in Saqlawiya which left 400 to 600 soldiers dead or captured, Iraqi forces besieged by insurgents in the village of Albu Etha, near Ramadi, were forced to abandon their positions after running short of ammunition. While the current status of Albu Etha varies according to sources, a joint force of Iraqi soldiers and tribal fighters reportedly re-captured the town of Sijir, near Fallujah. ISF counter-offensives in Anbar have been considerably hindered by IEDs placed along the main routes. The increased focus of IS on Anbar prompted US warplanes to deploy south of IS’s northern strongholds, with airstrikes reported in areas near al-Qaim, Ramadi and Fallujah. Meanwhile, militant cells continued to hit Baghdad with car bombs, causing dozens of civilian fatalities in Shia-dominated districts. On 25 September, a twin blast in the southern neighbourhood of Mahmudiyah killed seven people and wounded 23 others. The surge in militant activity in Anbar should ensure that government resources assisted by air support remain focused on Baghdad’s western and northern belts for the next days.

While the south-eastern governorates remained largely peaceful, ISF counter-offensives in the North could prompt IS to launch incursions in the South. Levels of violence in the South continued to contrast with incidents witnessed in Babil, with sporadic clashes and IEDs inflicting a number of casualties in the northern Jurf al-Sakhar and Iskandariya districts. As IS insurgents have been challenged in the North by a coalition of pro-government forces, their operations in Anbar as a means to distract the ISF could be expanded with VBIED incursions in the South. Additionally, while the reliance on Shia fighters in the North has effectively curbed tribal violence in the South, the ongoing competition for ministerial positions could lead to a renewal of clashes. This form of violence should remain low-level and low-impact however, with the general security outlook remaining aligned with current averages. 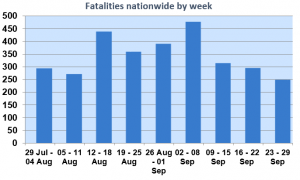