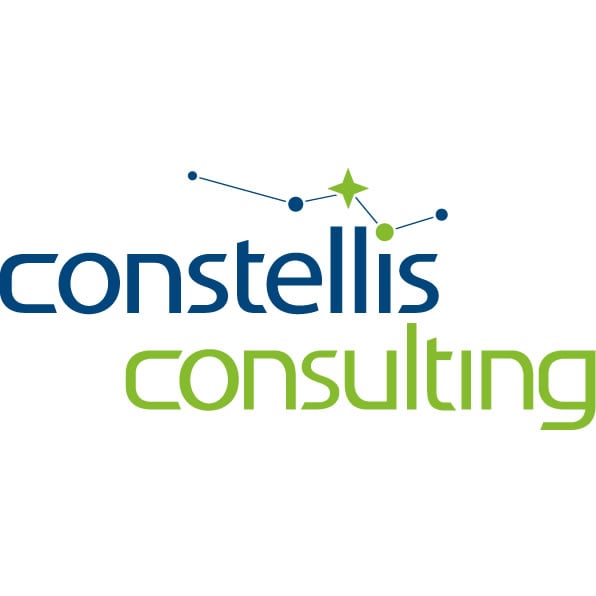 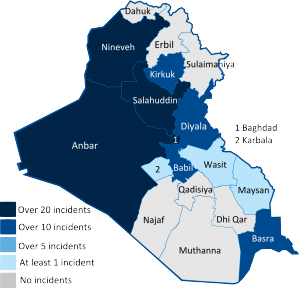 The Iraqi parliament’s approval of Sunni MP Khaled al-Obeidi as defense minister, and Mohammed al-Ghabban, a Shia member of the Badr Organisation, as interior minister, will provide a stronger political foundation for Abadi to counter the ISIS insurgency. Ghabban’s appointment follows weeks of negotiations and resistance from Abadi to nominate a member of the Iranian-backed Badr Organisation, best known for its powerful military wing accused of sectarian killings during the 2006-2007 civil war. While the move effectively cements Iran’s influence within the Iraqi cabinet and strengthens the government’s political response the security crisis, Abadi’s strategy to co-opt Sunni tribes and convince them to join ranks against ISIS is likely to be hindered. These political movements are also unlikely to be followed by important developments on the ground, with the security situation remaining critical in most of the North despite the US-led coalition’s continued air campaign. This was reflected in an increase of suicide attacks against ISF and Kurdish units, as well as a deadly series of car bomb attacks in Baghdad and Karbala. While ISIS continue their strategy aimed at seizing territories in the northern and central provinces, the South could witness a series of militant incursions over the next weeks, as the Shia festival of Ashura, which thousands of pilgrims are expected to celebrate, looms.

In line with last week’s patterns of violence, the front in Diyala remained the most volatile, with militants reportedly besieging the town of Qara Tappa, in the north-east of Baquba and only 75 miles north of Baghdad. On 20 October, insurgents managed to infiltrate defences near Qara Tappa by wearing Peshmerga uniforms, a tactic repeatedly used by ISIS to hit civilian areas. The clashes which followed killed at least seven soldiers and eight civilians, prompting the Kurds to send reinforcements from Khanaqin. This bold assault also demonstrates that ISIS are consolidating their positions in Jalawla and Sadia, and are increasingly pushing Kurdish forces on a defensive footing on this front. Further attacks were also reported on areas controlled by Kurdish units in Nineveh, where ISIS launched an assault in the Rabia district, near the Syrian border, and Yazidi areas near Sinjar. Other fighting areas included Baiji, where ISIS insurgents attempted an assault on the refinery, and areas to the south of Tikrit. Airstrikes and ISF reinforcements continued to hold back ISIS in territories to the north of Baghdad, particularly in Dhuluiya, a strategic town challenged by militant attacks. Increased insurgent activity in areas defended by the Kurds could indicate an imminent assault on Kurdish interests in Nineveh, Kirkuk and Diyala.

The recent gains made by ISIS in Anbar appear to have impacted on the levels of confidence displayed by insurgents on the ground, while militant cells in Baghdad also ramped up their activities with an increase in car bomb attacks in the capital. On 18 October, ISIS launched a three-front offensive on the town of al-Baghdadi between Hit and Haditha. While the attack failed after tribal fighters repelled ISIS, the group reportedly seized some neighbouring areas and are now surrounding the town. Besieging villages, in order to cause food and fuel shortages for the populations to surrender, has been a tactic consistently used by ISIS, especially in areas insulated from ISF support. While the presence of the nearby Ain al-Assad military base should ensure that reinforcements are sent, these developments show that the ISF have been increasingly pushed on a defensive footing in this strategic corridor. Meanwhile, as militants continue to be prevented from launching a frontal assault on Baghdad due to an important number of troops circling the capital, ISIS elements have been increasingly relying on suicide attacks to inflict damage and casualties. Amid a series of nine deadly car bombs, a militant blew himself up outside a mosque on 20 October, killing at least 17 people. This trend should be sustained over the next weeks.

The most significant incidents occurred in Karbala, where an unusual series of five car bombs killed scores of civilians. These attacks point to an escalation in militant activity in the South, as the festival of Ashura, which takes place on 03 November, usually draws tens of thousands of Shia pilgrims walking to Karbala. ISIS is intent on targeting large civilian areas and pilgrimages provide an effective avenue for such high-profile operations. ISIS’s consolidated presence in neighbouring Anbar means that heightened security measures will probably be easier to counter. The lack of ground intelligence will also be compensated by the large civilian gatherings expected for the occasion. Meanwhile, the south-east continued to follow pre-established patterns, with levels of criminal activities in Basra steadily increasing. 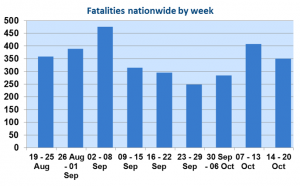