By Anne-Laure Barbosa at Edinburgh International 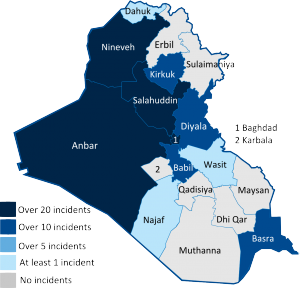 On 25 October, Prime Minister Haider al-Abadi visited the newly-liberated town of Jurf al-Sakhar, south of Baghdad, taking advantage of a rare opportunity to consolidate the legitimacy of the Iraqi government in their fight against ISIS. These fresh territorial gains, which also include parts of Nineveh and Kirkuk, followed sustained coalition airstrikes in support of ground troops which would otherwise hardly match the capabilities of insurgents. On 21 October, Abadi made his first visit to Tehran since taking office, which comes days after the appointment of Mohammed Ghabban, a member of the Iran-backed Badr Organisation, as interior minister. Iran’s involvement in Iraqi affairs has become increasingly apparent over the past weeks, with high-profile figures such Qassem Suleimani, the chief of Iran’s Quds Force, making rare public appearances in Iraq. Whilst Abadi built his electoral campaign around the necessity of building bridges with the Sunnis, the leader has been forced to appease the most conservative factions. Aside from nominating a Shia to the interior ministry, Abadi met with Ali al-Sistani, in a rare meeting with the most revered figure among Iraqi Shias. Whilst the Prime Minister continued to rule out any foreign ground intervention, levels of violence continued to claim hundreds of casualties across the country. The number of people killed by car and suicide bombs this month reportedly reached 590. As the festival of Ashura nears, militants could launch attacks on pilgrim routes to Karbala.

The most significant territorial gains made by the Kurds occurred in the northwest of Mosul. The Peshmerga, assisted by heavy coalition airstrikes, retook the strategic town of Zumar and several nearby villages on 25 October. If the Kurds manage to hold the area, Zumar could provide a basis for operations in Sinjar, which remains controlled by ISIS and had so far been inaccessible to the Peshmerga. Meanwhile, Iraqi forces moved into areas in the vicinity of the Himreen mountains, south of Kirkuk, leading to the recapture of additional territories. This operation, which is part of a larger strategy to retake Jalawla and Sadia, aims at disrupting ISIS’s supply lines into Kirkuk. Despite these strategic advances, ISIS continued to translate their freedom of movement into high-casualty attacks and public executions. A VBIED near Tuz killed at least seven civilians and injured dozens, while several Iraqi police officers arrested by ISIS were executed on 24 October. IEDs placed on roads continue to hinder counter-offensives south of Tikrit and further east in Diyala, ensuring that heavy clashes remain confined to the frontlines for the next weeks.

As ISIS continues to cement their grip on Anbar, a series of suicide attacks claimed the lives of dozens of civilians in the capital. Albu Nimr, near Hit, is the latest in a string of places to fall in Anbar in recent weeks. On 23 October, ISIS took control of the Furat sub-district, west of Hit, while a coalition of tribal forces and ISF managed to repel an attack on Amiriyat al-Fallujah, south-west of Fallujah. ISIS’s extended control of the western province means that insurgents are now able to launch assaults from multiple axes, further weakening pro-government defences. Anbar’s largest air base Ain al-Assad and the Haditha Dam are now encircled to the west from the Syrian border and to the east from Hit and parts of Ramadi. Meanwhile, militants sustained their efforts on Baghdad, where a series of deadly car bombs hit several eastern districts. On 21 October, unidentified mortar shells reportedly landed inside the heavily-fortified Green Zone, which houses several government buildings. ISIS’s attacks against the capital continue to demonstrate their incapacity to launch a coordinated ground assault from neighbouring governorates, and rather rely on militant cells destabilise Baghdad.

As Iraq braces for the festival of Ashura, the ISF regained control of a key area south of the capital. Iraqi security forces backed by Shia militiamen pushed out ISIS militants out of the town of Jurf al-Sakhar on 26 October, following months of fighting. The town was at the hands of ISIS militants since the end of July. The recapture of Jurf al-Sakhar is critical as it lies on a road usually taken by pilgrims converging on the holy shrines of Karbala. Despite this victory however, a suicide attack in the town killed 27 Shia volunteers on 27 October, demonstrating that ISIS elements remain active in the area. South-eastern provinces continued to avoid mass-casualty attacks despite the imminence of Ashura, the lead-up to which usually witnesses high levels of violence. 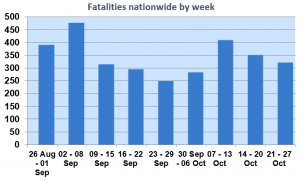