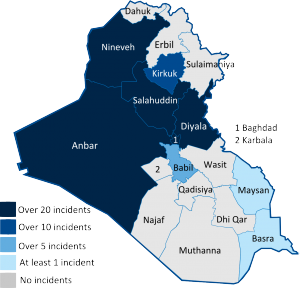 Abadi’s reshuffle represents the first major set of changes to the Iraqi Security Forces since the new Prime Minister took office, and predominantly focused on positions created by former PM Nouri al-Maliki, from whom Abadi seeks to distance himself. The dismissals included the Iraqi Army Chief of Staff and the Baghdad Operations Command (BOC) Commander, responding to accusations of inefficiency and self-interest formulated against the ISF’s highest-ranking officers. Aside from building his own reputation and winning public support, this decision is also likely aimed at removing elements loyal to Maliki from key government positions, effectively restructuring the country’s armed forces. While competition for the control of Iraq’s security apparatus is likely to continue as divisive currents emerge, the central government and Kurdish authorities reached an interim agreement over oil exports and budget payments, easing a dispute which has been lasting for months. Despite this encouraging starting point, prompted by economic urgency, the deal fell short of long-term solutions and a permanent agreement regulating Kurdish oil exports is unlikely to be signed in the near future. While the political landscape remains divisive and the central government struggles to assimilate Sunni constituencies, ISIS’s violent strategy against moderate Sunnis will continue to damage the group’s relations with local tribes. The next days are likely to see ISF operations launched from the Baiji area, and could involve a push to the north towards Mosul, to the east towards Hawijah, or to the south towards Tikrit.

Most of pro-government resources were employed to launch a significant offensive in northern Iraq, in order to capture Baiji and rebuild supply routes to the South. The ISF are sustaining their efforts to take full control of Baiji, which would be the first major urban centre recaptured by Iraqi Forces since ISIS launched their offensive across north-western Iraq in June. Despite a series of complex attacks on the refinery, ISIS has so far proven unable to capture the infrastructure. In the face of this major ground operation, insurgents are likely to move reinforcements from their neighbouring strongholds to the Baiji area, in order to secure their main transportation routes. Whilst Baiji has not yet been cleared, militants have adopted an increasingly defensive posture, and the ISF appears to be in a position to set the terms of battle, now that the majority of the town has reportedly been cleared. Other troop movements were reported in western Kirkuk, where Kurdish forces seized a village in the north, whilst airstrikes targeted ISIS positions in Hawijah. Clearing operations were also organised to the north of Muqdadiyah in Diyala. If the capture of Baiji is complete, pro-government forces are likely to launch counter-offensives against key ISIS positions in Salahuddin and neighbouring Kirkuk.

Security dynamics remained stagnant in central governorates, with the main clashes occurring in the Baghdadi sub-district, near Hit. On 11 November, the US government announced that 50 American troops were sent to Anbar’s al-Assad airbase, where they will train 400 fighters who will form part of a 3,000-strong anti-ISIS force. This move signals the strategic importance which Anbar holds in the current conflict, with most transportation routes to Syria going through the western province. The mobilisation of Anbari tribes follows atrocities perpetrated by ISIS against moderate Sunnis in the province. On 15 November, insurgents reportedly kidnapped 36 members of the Albu Nimr tribe, leading them to an unknown location. In Baghdad, levels of violence remained aligned with previous averages, with a series of car bombs aimed at destabilising the capital. The relative decrease in the number and magnitude of reported incidents in the capital continues to demonstrate the current incapacity for insurgents to infiltrate Baghdad, with ISIS relying on their ‘sleeper’ cells to plan and organise the attacks. A large-scale counter-offensive organised by Anbari tribes and backed by airstrikes is likely to take time, and therefore the security situation should remain stagnant for the next weeks.

Levels of violence reported in Babil continued to drop, whilst acts of criminality in the southern provinces also witnessed a lull. The recent ISF capture of Babil’s Jurf Al-Sakhar district continued to account for low levels of militant activity in the province, whilst allowing pro-government forces to defend Baghdad’s southern belt and repel offensives launched by ISIS on Amiriyat al-Fallujah, south-east of Fallujah. In the absence of major incidents in the South-East, low-impact IEDs and small arms attacks continued to be connected to personal disputes and criminal activities. This trend is likely to be sustained over the next weeks, as operations increasingly focus on the country’s North. 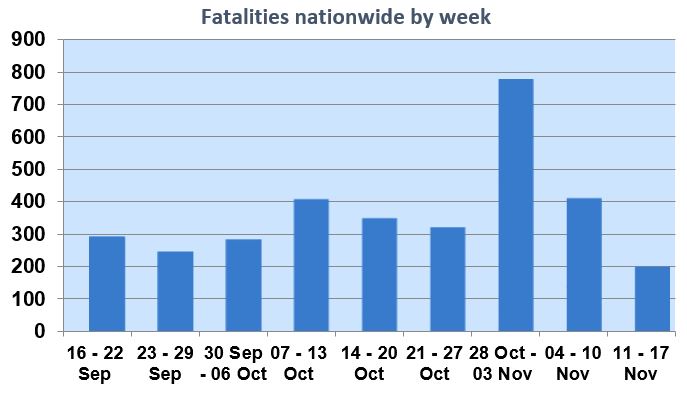