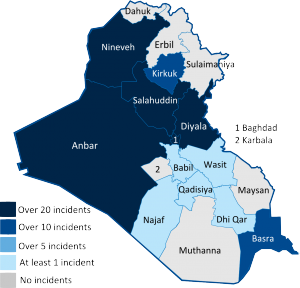 2015 draft budget wins cabinet approval as Baghdad sets out New Year spending plans for defence, energy and reconstruction priorities. While the Iraqi public accounts are anticipated to run at a deficit of some 23 trillion dinars (approximately $20 billion) during the coming year as a consequence of sliding oil prices and security expenditure, the deal has nonetheless represented a considerable breakthrough for PM Abadi’s cross-party diplomacy, coming less than a month after Kurdish ministers approved terms for a new allocation of petroleum revenues with the federal government. Common areas of concern to both the KRG administration and Baghdad, including defence, the refugee crisis and financial constraints are likely to have also played a role in the political rapprochement of recent months. Within the Kurdistan region itself, the governing Kurdish Democratic Party (KDP) of President Barzani continued to announce measures to tackle the economic and social plight of the Yazidi community this week, in an attempt to rebuild party standing among Sinjar residents, following the initial failure to prevent the fall of the region to Islamic State of Iraq and al Sham (ISIS) control in August 2014

Peshmerga consolidate gains in the disputed territories, security environment remains highly volatile in Dhulaiyla and Balad areas of Salahuddin as Iraqi Security Force (ISF)-militia alliance launch renewed clearing operations. Starting from 26 December, four villages are known to have been cleared in the course of the offensive, along with hundreds of IEDs left by the retreating ISIS forces. Rather than resisting every incursion, ISIS units have instead chosen to withdraw from areas that are likely to prove too difficult to defend, having heavily mined houses and roads aimed at inflicting casualties on the advancing troops. The tactics mirror those deployed by ISIS cells retreating in the wake of the Peshmerga Sinjar offensive last week, and combined with sporadic SVEST and VBIED strikes continue to make all travel to liberated areas extremely hazardous. In one particularly deadly attack on 26 December, five ISF personnel were killed in the Albu Hismha village of Balad when a car bomb struck a police convoy.

ISIS advance on Haditha resisted by Iraqi security forces as battle for Ramadi reaches critical stage. Following the build-up of military forces documented in last week’s Iraq update, militant fighters attempted to open up a new front of the Anbar campaign, leading a series of bold incursions towards Haditha, targeting Khasfa village on 28 December before mounting a full stage assault on the city’s hydroelectric dam a day later. Despite fierce clashes however, the raids were unsuccessful, with as many as 30 ISIS fighters and six armoured vehicles known to have been destroyed by the alliance of ISF and tribal militias backed by coalition air support. Nonetheless, with the provincial capital of Ramadi still actively contested by militant forces, large numbers of whom continue to enter the province on a weekly basis, the situation in Anbar remains extremely precarious for the government’s counter-ISIS groups. In the capital, failure of ISIS cells to strike against Shia communities in central areas of the city this week saw a diversion of suicide bombings to the outer districts, with at least 29 people killed and some 54 injured in a single SVEST strike during a funeral of Sunni Awakening council (Sahwa) fighters in Taji on 29 December.

Basra city encounters a significant increase in the level of drive-by shootings, amid otherwise stable security environment across southern governorates. Among districts targeted this week were the Qarmat Ali and Kafaat areas of the city, both of which reported multiple shootings of local civilians, including Sunni residents, tribesmen and employees of Basra University. While the identity of many of the attackers has yet to be ascertained by the police, the incidents are not believed to be linked to the wider nationwide insurgency. Ongoing Iraqi Army operations in Babil and the northern states continue to prevent the spread of ISIS fighters and VBIEDs to major cities such as Karbala and Nasiriyah, though in Basra the diversion of ISF presence has come at the cost of a rise in armed criminality, as armed gangs operate with increased impunity. Notably on 25 December, an employee of a Zubayr industrial firm was assaulted and more than $365,000 stolen when a group of armed men intercepted the company’s vehicle in the Khor al-Zubayr area. While unlikely to disappear in the long term, the risk of armed criminality has the potential to fall over the coming month following the deployment of the 76th Brigade of the Iraqi army to Basra on 26th December. 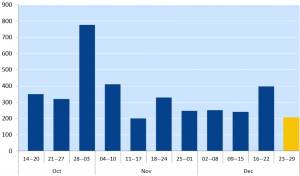