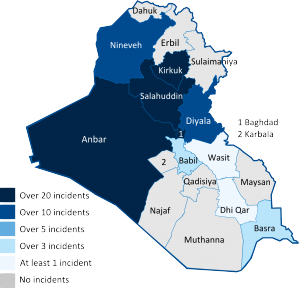 Ground operations against the militant stronghold of Tikrit have reached a temporary halt outside the city’s central districts as reinforcements arrive in preparation for further heavy fighting. Following last week’s Iraqi update, militia-backed reserves have pressed into the city from the northern, western and southern axes, capturing much of the outlying suburb of Qadisiya on 13 March and driving ISIS forces back to core defensive positions south of the city’s Industrial zone. Official casualty figures have not been reported from the scene, although eye witness accounts have indicated significant fatalities on both sides, particularly among the less experienced Shia PMU volunteers who now comprise the majority of troops in the battle. Effectively surrounded, ISIS militants are expected to present a fierce resistance to any further house-to-house incursions by the Iraqi army over the coming week, resulting in additional casualties and even the potential for a deferral of ground operations until militant defences can be sufficiently weakened by mortar and aerial bombardment. The destruction of Saddam Hussein’s Mausoleum in Tikrit this week also served as a pointed reminder of the bitter history of Iraq’s recent history, as Kurds gathered across northern provinces on 16 March to commemorate the 27th anniversary of the Halabja chemical weapons attack.

Kurdish forces backed by coalition and militia support have reported further successes against ISIS around Kirkuk city, as militant supply networks face increasing strain. Almost two months since militants launched a surprise offensive on the Peshmerga stronghold, approximately 19 villages are understood to have been recaptured by the allied forces, including the strategic territory of Al Bashir on 13 March, which fell following the steady advance of ground troops from 10 March onwards. At least four PMU fighters are also reported to have died in the clashes, along with the injury of 35 others, in a rare example of coordination between the KRG troops and Arab fighters, mirroring cooperation between Sunni and Shia anti-ISIS factions in Salahuddin. While such gains to the south and west provide a valuable buffer to Kirkuk city, the location of Kirkuk, so close to the militant stronghold of Hawija is likely to mean that long term security gains are unlikely to be achieved, without a full-scale ground campaign as witnessed in the ongoing battle for Tikrit. Following the liberation of the Al Multaqa and Mulla Abdullah areas on 10 March, ISIS fighters responded with heavy shelling from safe positions, a number of which landed close to North Oil Company facilities west of the provincial capital. Despite this upheaval however, security conditions in Erbil and the northern KRG territories remained secure, with no militant attacks or threats to commercial interests recorded.

In contrast to developments in the north, frontline positions saw limited change this week as heavy airstrikes cover blunted ISIS re-infiltration attempts against Ramadi town. The most significant of these assaults occurred on 11 March when gunmen launched a three-pronged attack on the city’s northwest, northeast and southern ISF strongpoints, using mortars and suicide car bombs to strike critical infrastructure before attempting to overrun tribal and Iraqi army positions. Official sources indicate that in most cases these attacks were repelled, although in the days that followed some 10 additional airstrikes were directed by coalition forces to prevent repeat offensives. The tactical shift back towards Ramadi has occurred amid the neutralisation of militant’s Baghdadi and Haditha ground assaults and is likely to represent an effort to consolidate territory in the face of ISF pressure from the east and west. As reported last week, the ISF are engaged in ongoing operations around Karma town (approximately 10km north east of Fallujah) and have the potential to advance further into enemy territory, after recapturing the militant village of Al Rashad on 10 March. Any such development would offer a welcome reprieve for north-western Sunni districts of Baghdad, which for weeks have suffered repeated VBIED strikes, facilitated by the transit of explosives from the ISIS front line.

Tribal violence in Basra, Maysan increases risk to expatriate transits in affected areas, amid renewed employment protests in the Qurna area. Occurring on 16 March, the confrontations in Qarmat Ali (north Basra) and Mijar al Kabir (immediate south of Amarah town) both saw tribal fighters discharge automatic weapons, resulting in numerous casualties, including up to ten people killed and 27 wounded in the case of the latter. The immediate cause of the clashes has yet to be identified, although disputes over land and rivalry between clan leaders are known to have aroused similar confrontations in the past. Tribal instability was also reported five days earlier when Gaabna clansmen blocked road access to sites in the North Qurna area, and fired shots at a local Iraqi army-guarded seismic team in a bid to demand employment opportunities, resulting in at least one IA officer wounded before ISF cleared the area. While similar protests have occurred in the past, (the last such demonstration occurred on 04 January), the use of stone throwing and small arms fire attacks as a form of protest represents a relatively new development in local tactics for the Basra area and has the potential to significantly raise the security challenge of commercial operations if such attacks persist in the future.