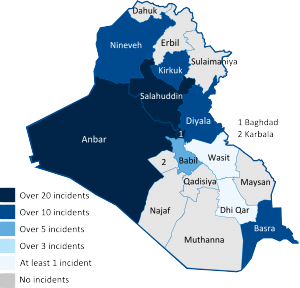 Coalition prepares to cooperate in ISF-militia campaign to liberate Tikrit, amid extension of US reconnaissance and air support. While US drone flights are known to have been taking place since 21 March, (reaching as far east as Muqdadiya, 50km from the Iranian border), official participation by the United States in the stalled Tikrit offensive has so far been limited to auxiliary support, due to hostility among sections of the campaign’s Iranian-backed militia forces. Should coalition forces receive the official invitation by the Iraqi authorities to undertake airstrikes into Tikrit as diplomatic sources have indicated is likely to occur, this would place the United States in a state of indirect cooperation with elements of the Iranian military, including Tehran’s revolutionary guard “Quds force”, which is involved in advising operations on the ground. Politically, the move would almost certainly serve to heighten tensions within the campaign’s fractured political milieu, although on a tactical level US air support alone is unlikely to radically alter the outcome of the campaign. Coalition warplanes are already active in bombing runs across the ISIS strongholds of Mosul, Hawijah and Anbar province where they continue to destroy militant units on a daily basis, while in Tikrit itself, the Iraqi air force remains operational, striking the Al Seniya sub-district of the city on 17 March.

Disputed battlefields around Kirkuk, Mosul and central Salahuddin witness a gradual withdrawal of ISIS territorial possession, despite a temporary halt in the now four week old Tikrit offensive. Major gains continued to be reported in the villages south and west of Kirkuk city, including in the Daquq area, where on 18 March, heavy fighting was recorded between ISIS fighters and Peshmerga troops in the Aziziya area. Now in full control of Bashir village, Kurdistan Region Government Forces are anticipated to face further resistance in their bid to push into militant centres, with unofficial sources confirming the arrival of fresh reserves to the Hawija front from ISIS’s northern stronghold of Mosul. While the ISF have not yet proceeded to implement stage 2 of the Tikrit assault, fighting nevertheless remains intense within the town with militants continuing to mount regular counter attacks against the larger allied army, including on the strategic area of Tikrit University on 18 March and the Khauimi area three days later. Such forays have demonstrated that despite efforts to starve the besieged militants of ammunition and food supplies, resistance to further ground offensives remains high. Attempts to divert ISF resources to the neighbouring towns of Baiji and Samarra have also been identified over the reporting period, largely in the form of coordinated attacks on Sunni villages which have in turn provoked armed opposition from tribal fighters in the Al-Mazraa area.

ISF close in on ISIS positions north-east of Fallujah, with militant bombings continuing to occur across Shia and mixed areas of Baghdad. Following last week’s developments, the major focus of Iraqi Security Force (ISF) operations remained the dispute town of Karma and the wider Fallujah area, both of which witnessed a surge in confrontations as coalition airstrikes were launched against militants in Al Qaim, Ramadi, Rawa and Baghdadi. On 19 March, ISF units reported that they had surrounded Karma itself, having recaptured the Mamal, Jazeera and Hamria areas west and north of the city over the preceding three days. The immediate impact of these manoeuvres has been to effectively push back militant control to an extent not seen since July 2014 around Fallujah, resulting in the death of as many as 82 ISIS recruits over the reporting period. Outer districts of Baghdad have also benefitted from the reduction in mortar shelling accompanying this process, with the three Katyusha detonations recorded in New Baghdad and Jisr Diyala now confirmed as accidental launches resulting from a fire in the Mamil ammunition storage facility. For the coming week, mixed Shia areas are anticipated to remain the prime target of ISIS IED and VBIED strikes, following the triple car bombs in Sadr city, Zafaraniya and Bab Sharqi over the preceding four days.

Risk of tribal conflict remains high on Basra’s northern routes, as southern provinces witness first VBIED attacks in five months. Among the targets of this week’s bombings was the commercial port of Um Qasr which on 18 March saw a truck bomb detonate outside the facility’s external perimeter, killing three local civilians and injuring four others. The scene of low level industrial action in recent months, the incident is the deadliest single attack on the facility since August 2013, when militants aligned with the Islamic State of Iraq and Al Sham (ISIS) struck a loading berth in a similar stationary VBIED detonation. While such incidents were relatively common prior to the ISIS offensive across northern Iraq in June 2014, recent months had witnessed a near total suspension, as militants diverted resources to more pressing needs in the Salahuddin and Anbar battlefields. Given the high profile nature of the target, it is likely that a VBIED was used as part of a wider strategy by ISIS to deflect attention away from its stalled offensives in the north-west and strike back against Shia interests in the south. While further attacks on commercial infrastructure cannot be ruled out, at present the principal risk of armed attack in southern areas remains the threat of tribal clashes, as further shootings between rival families were reported in the At Tuba (Basra), Al Zubayr and Shaghanba areas.