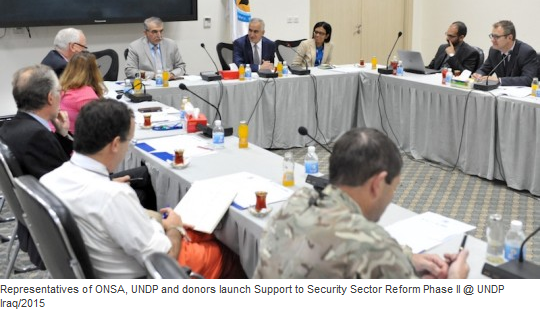 By Editor on 9th September 2015 in Security

As the security environment in Iraq remains complex and challenging, Security Sector Reform (SSR) is a prerequisite for both long-term stability and peace.

The United Nations Development Programme (UNDP) has been engaged with the Office of the National Security Adviser (ONSA), through its Support to Security Sector Reform Phase I, to develop a National Security Strategy (NSS). The strategy centralizes the concept of human security and promotes inclusivity and equality, and its development has revealed the immediate and fundamental need for the Government to focus its efforts on developing a SSR plan.

On 3 September 2015, the implementation of Support to Security Sector Reform Phase II was launched in Baghdad with financial support from the United Kingdom, the Netherlands and Denmark. As a collaborative effort between UNDP and ONSA, Phase II will seek to frame the ways in which the Government intends to develop an accountable, affordable, representative and responsive security sector that reflects the needs and concerns of all Iraqis.

The proposed plan is expected to address the short, medium and long-term priorities needed to enhance the efficiency, effectiveness and accountability of the Iraqi security sector, and ensure that future SSR interventions are coordinated constructively within one central framework.

Other objectives include establishing cooperation and coordination mechanisms, strengthening the democratic oversight capacity of the Security and Defense Committee, increasing the Government engagement with civil society, as well as enhancing civil society capacity in the field of security sector reform.

Further, ONSA made a formal request to UNDP to support the Government of Iraq to develop a SSR plan, as outlined in the NSS and consistent with the Government’s reform programme. UNDP has been supporting security sector reform in Iraq since 2013 under the auspices of its broader rule of law engagement.