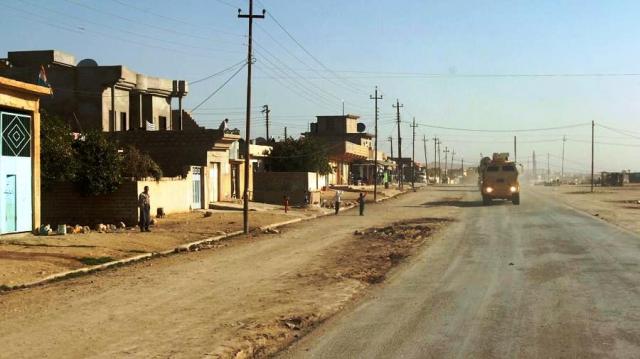 Gen. Hadi Halabjayi and his peshmerga troops were getting settled in the new territory in the Khazir area they had captured from the Islamic State (IS) in late May after a day and a half of fighting.

Sitting under a cloth shade hung between two vehicles, Halabjayi held a piece of shrapnel from a mortar that had landed just minutes before.

“It's a big territory we have taken and we are quite close to Mosul now from this side as well,” Halabjayi told Al-Monitor, as he pointed toward a nearby village.

A few minutes later, he got up with the help of a wooden stick and surveyed the hot, dusty plains of eastern Ninevah province. Occasionally, he shouted an order at the people around him.

“These territories are Kurdistan's now. We will not give them back to the Iraqi army or anybody else,” said the general. “We have had four of our peshmergas die here and several injured for this territory. [IS] exploded eight suicide bombers in this area,” he said.

Halabjayi's words sum up the sentiments among the peshmerga and Kurdish officials these days: The blood they are shedding should not go in vain.

In a two-day operation over May 29-30, 5,500 Kurdish peshmerga forces wrested control of nine villages from IS encompassing an area of around 120 square kilometers (46 square miles).

Kurdish authorities described the offensive as "one of the many shaping operations” to increase pressure on IS militants in nearby Mosul leading up to an eventual charge on the major IS stronghold.

2 Responses to Will Iraqi-Kurdish Conflict Break Out in Nineveh?