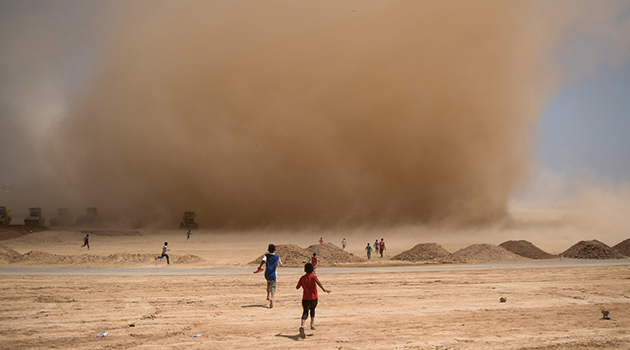 Iraq has been involved in many wars, but soon it will have to turn its attention to yet another front or risk being overwhelmed by an environmental crisis.

Two coinciding events recently highlighted the gravity of Iraq's ecological situation. On Aug. 7, Islamic State (IS) militants ran a pipe from the Kiyara refinery to the banks of the Tigris River. After pumping oil into the river, they set it on fire to destroy a military pontoon bridge Iraqi forces built recently as they prepared to reclaim Mosul.

On Aug. 6, Baghdad's city administration announced that the capital produces nearly 11,000 tons of waste every day. The administration said state corruption is hindering any progress toward a solution.

Many factors threaten Iraq's environment, from the irresponsible behavior of some Iraqis who are used to littering rivers and public squares, to the ammunition and equipment remnants from consecutive wars, to the use of radioactive substance in battles.

Another threat, experts say, is the government's negligence and poor execution of projects.

The latter was illustrated when Diyala provincial council's environmental committee revealed in a July 29 press conference that “urban afforestation programs have constantly failed since 2003, as urbanization wiped out 30% of greenbelts.” This is just one example of several failed environmental projects in Iraq.

Urbanization has withered green spaces across Iraq. Unlicensed building in farmlands and forests has eroded the soil of orchards. As a result, sandstorms have intensified, causing sand and dirt to pile up over the roofs of houses and in the streets and aggravating health problems for people with respiratory diseases. Not only that, but sandstorms are being blamed in part for a rise in temperature levels, which now reach 50 degrees Celsius (122 degrees Fahrenheit) during the summer. In a July 29 press statement, Abdullah al-Jabbouri, a member of the parliamentary health and environment committee, urged the government “to come up with an environmental plan to face heatwaves.”

Saleh Abbas, an expert in crop protection at the agricultural directorate in Babil in central Iraq, told Al-Monitor, “The environment in Iraq is victim to the lack of environmental awareness, weak laws and an absence of accountability and government follow-up, which made it easier to abuse natural resources. For instance, the number of palm trees has decreased to a point that raises concern, as housing and industrial projects are being carried out in orchards.”