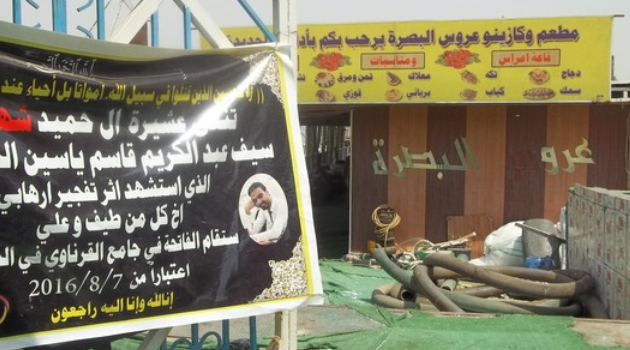 By Editor on 23rd September 2016 in Employment, Security

Religious Extremists Bomb Cafes In Basra Because They Employ Women

In Basra a series of cafes and venues have been bombed. Such a security breach is rare in this part of Iraq. The perpetrators? Religious extremists, who say women shouldn’t be employed in these places.

It was the second bombing of its kind. And after the incident, those clearing the wreckage in the Coffee Time Café in central Basra found a flyer describing the cafes as “the house of the devil” and threatening all those who worked in the cafes with death and other dreadful retribution.

The first attack had been on another café in July and the perpetrators used an improvised explosive device on the side of the road. This was followed by further attacks targeting venues that were used as casinos on the edges of city waterways, including one called the Arous Al Basra in early September; these tend to be popular with tourists coming to the relatively peaceful southern Iraqi city.

Beside the casinos there are also many cafes in these areas, frequented by young people and by families. In the Arous Al Basra bombing, a man died and there have been many injuries. A worker from Bangladesh was injured in the Coffee Time Café bombing.

The apparent reason for the attacks in the town? Women employees in the cafes.

Basra isn’t really under threat from Sunni Muslim extremists like the Islamic State group, because almost all the population here is Shiite Muslim and security is tight.

“This café and others have employed women in service-related fields,” says Huda Kareem, 32, one of former employees at the Arous Al Basra. Kareem had been working at the venue for around two years but now she and many of her colleagues no longer have a job or an income. “Extremists have attacked the venues and cafes because they employ women, and that means that opportunities that were available to us have closed off.”