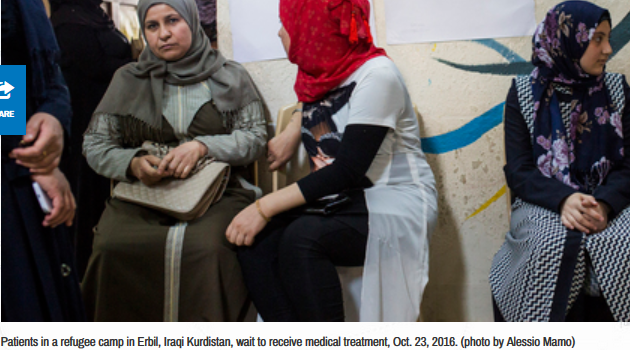 By Marta Bellingreri for Al Monitor. Any opinions expressed here are those of the author and do not necessarily reflect the views of Iraq Business News.

More than 5,600 people have been displaced in just the first three days of fighting after Iraqi forces launched their offensive on Mosul to oust the Islamic State from Iraq's second-largest city.

In the first few weeks of the campaign, which began Oct. 17, more than 200,000 people are expected to flee to camps and shelters in the north of Iraq. The daily battles lead to daily struggles to save lives in Iraqi Kurdistan, where thousands of internally displaced Iraqis live. Some have been there since the summer of 2014, when Mosul and its entire governorate, Ninevah, fell under IS control.

In the Iraqi Kurdistan capital of Erbil, about 80 kilometers (50 miles) east of Mosul, local women work with the Zhyan Women's Reproductive Health project. Zhyan is run by the Italian nongovernmental organization Un Ponte Per (A Bridge To).

All the medical staff there are displaced nurses, gynecologists or general practitioners. In the Kurdish language, "zhyan" means “life,” which suits these workers trying to bring themselves, other displaced people and refugees back to life in an Iraq still far from stabilization and reconciliation.

Raunak, a nurse, graduated from the University of Mosul in 2010. She and the others asked that only their first names be used for safety reasons. The Mosul native has worked with Zhyan since February 2015, seeing about 25 patients every day at Kasnazan Clinic on the outskirts of Erbil. “I follow courses and training to improve my skills," Raunak said. "I don’t want to interrupt my education and my life."

The patients are displaced from all over Iraq, and there are also women from Syria. Some women go to the clinics when they discover they are pregnant. Others receive their first-ever gynecological exam.