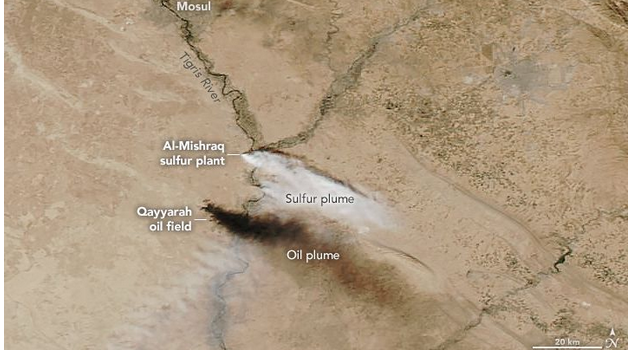 The Iraqi government and humanitarian organizations are currently dealing with the aftermath of Daesh’s “scorched earth” policy in the Qayyarah area, which has posed a twin threat of smoke from oil fires and sulphur dioxide from the Mishraq Sulphur plant, which was set on fire by Daesh but has now been extinguished.

At Qayyarah, 19 oil wells were set on fire by the terrorists, some of which are still burning.

This crisis occurred in August, ahead of Iraqi forces’ advances, when Daesh appeared to be attempting to burn the town, and according to some sources, set the Tigris River on fire with oil slicks. The Tigris River is a main source of freshwater for millions of Iraqis.

Last week, NASA released satellite images showing the Sulphur Dioxide plume in the region (pictured) which had injured 1000 residents and killed two in the vicinity of Mosul.